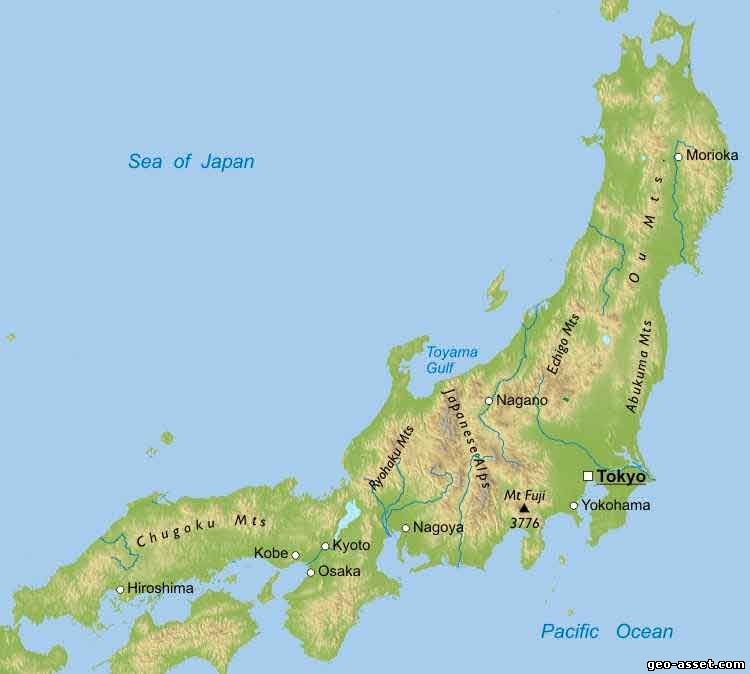 Japan is an island nation in East Asia. Located in the Pacific Ocean, it lies to the east of the Sea of Japan, China, North Korea, South Korea and Russia, stretching from the Sea of Okhotsk in the north to the East China Sea and Taiwan in the south. The characters that make up Japan's name mean "sun-origin", which is why the country is sometimes referred to as the "Land of the Rising Sun". Japan is an archipelago of 6,852 islands, the four largest being Honshu, Hokkaido, Kyushu and Shikoku. Together, these four islands hold about 97 percent of the country's land area. Japan has the world's tenth-largest population, with more than 126 million people. Honshū's Greater Tokyo Area includes the de facto capital city of Tokyo and several surrounding prefectures. It is the largest metropolitan area in the world, with more than 30 million residents.

About 73 percent of Japan is forested, mountainous, and unsuitable for agricultural, industrial, or residential use. As a result, the habitable zones, mainly located in coastal areas, have extremely high population densities. Japan is one of the most densely populated countries in the world.

The islands of Japan are located in a volcanic zone on the Pacific Ring of Fire. Japan has 108 active volcanoes. Destructive earthquakes, often resulting in tsunami, occur several times each century.

Japan takes the 10th place in the world for population. Japan was the first country in Asia which had moved from the second to the first reproduction type. National structure is homogeneous. This is a typically mono-national country, where Japanese are 99% of population. There are two main religions - Shinto and Buddhism in the country. Japan is highly cultured and literate country. There are more universities than in the Western Europe. Japan takes one of the first places for the population average density (340 people at 1km). Urbanization is 80%.