Environment - current issues: radioactive or toxic chemical sites associated with former defense industries and test ranges scattered throughout the country pose health risks for humans and animals; industrial pollution is severe in some cities; because the two main rivers that flowed into the Aral Sea have been diverted for irrigation, it is drying up and leaving behind a harmful layer of chemical pesticides and natural salts; these substances are then picked up by the wind and blown into noxious dust storms; pollution in the Caspian Sea; soil pollution from overuse of agricultural chemicals and salination from poor infrastructure and wasteful irrigation practices

Kazakhstan, geographically the largest of the former Soviet republics, excluding Russia, possesses enormous fossil fuel reserves and plentiful supplies of other minerals and metals, such as uranium, copper, and zinc. It also has a large agricultural sector featuring livestock and grain. In 2002 Kazakhstan became the first country in the former Soviet Union to receive an investment-grade credit rating. Extractive industries have been and will continue to be the engine of Kazakhstan's growth, although the country is aggressively pursuing diversification strategies. Landlocked, with restricted access to the high seas, Kazakhstan relies on its neighbors to export its products, especially oil and grain. Although its Caspian Sea ports, pipelines, and rail lines carrying oil have been upgraded, civil aviation and roadways continue to need attention. Telecoms are improving, but require considerable investment, as does the information technology base. Supply and distribution of electricity can be erratic because of regional dependencies, but the country is moving forward with plans to improve reliability of electricity and gas supply to its population. In 2010 Kazakhstan joined the Belarus-Kazakhstan-Russia Customs Union in an effort to boost foreign investment and improve trade relationships.

Officially, Kazakhstan is a unitary republic. Its first and, to date (2014), only President is Nursultan Nazarbayev. The President may veto legislation that has been passed by the Parliament and is also the commander in chief of the armed forces. The Prime Minister chairs the Cabinet of Ministers and serves as Kazakhstan's head of government. There are three deputy prime ministers and sixteen ministers in the Cabinet.

Kazakhstan has a bicameral Parliament composed of the Majilis (the lower house) and Senate (the upper house). Single-mandate districts popularly elect 107 seats in the Majilis; there also are ten members elected by party-list vote. The Senate has 47 members. Two senators are selected by each of the elected assemblies (Maslikhats) of Kazakhstan's sixteen principal administrative divisions (fourteen provinces plus the cities of Astana and Almaty). The President appoints the remaining seven senators. Majilis deputies and the government both have the right of legislative initiative, though the government proposes most legislation considered by the Parliament. 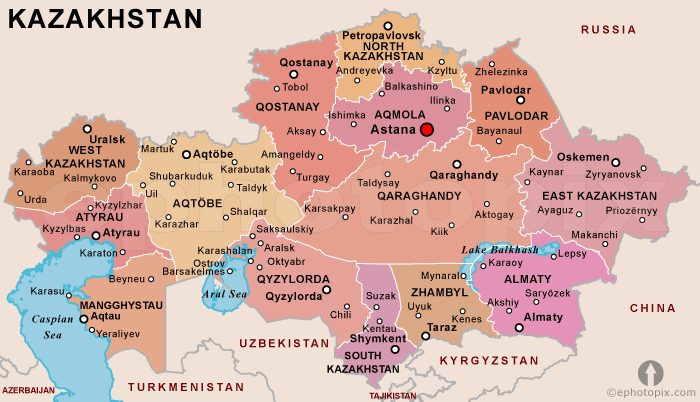