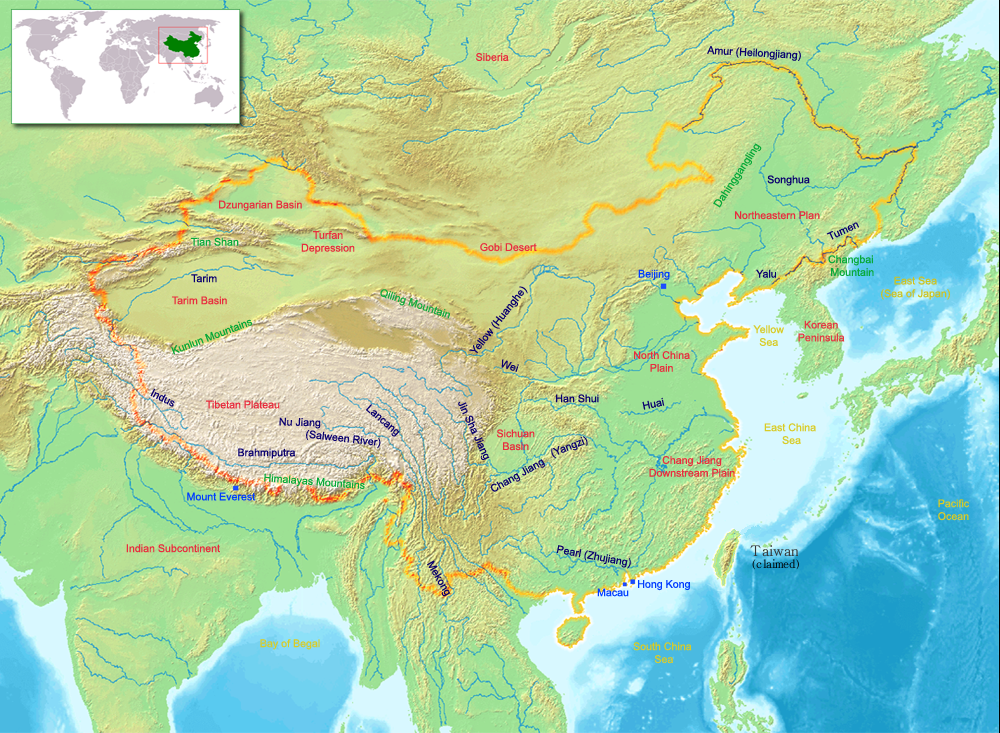 Historically, China has been physically isolated from the rest of the world by mountains, deserts and seas. This helped to allow a unique culture to develop.

China is physically broken up into three distinct regions:

1. The River Lowlands region is the most populated area of China. The land is very fertile. Wheat is grown mainly in the north. Rice and tea are the main crops in the south. The three great rivers of China flow through this region: Huang He (Yellow) River, Chang Jiang (Yangtze) River and Xi Jiang (Pearl) River. Major cities including Beijing, Shanghai and Hong Kong are also located in the River Lowlands region.

2. The Dry Region of China is physically made up of mountains, deserts and grasslands. It is located mainly along the northern border with Mongolia and the western border with Kazakhstan. Irrigation canals are used to support farming in this region. Nomadic herders also live in this region that is sparsely populated. Summers are hot, winters are cold and droughts are common in the Dry Region of China.

3. Highland China is located in the Southwest Region of the country. It covers nearly 25% of China’s land area, but only contains about 1% of the population. The region consists of the Plateau of Tibet and the Himalaya Mountains. It is cold and treeless.

China takes the third place in the world for the territory. China stretches from the west to the east to 5,7 thousand km and from the north to the south to 3,7 thousand km. There are 23 provinces (including Taiwan) in the country. They have large areas and China is the most populous country of Asia and the entire world. Really, the population problems leave traces on the Chinese’s lifestyle.

Nowadays the population of China is 1,3 billions of people. In China live 19,9% of all inhabitants of our planet. Population policyis directed to thehighbirth ratereduction.

• the fifth place in the world for the explored reserves of iron ore (15 billion ton);

• the sixth place for the manganese ore reserves (270 million ton);

• the third place for the molybdenum reserves (1,2 million ton);

• China is known as one of the world main producers of agricultural products.

Political System of China refers to the political structure, fundamental laws, rules and regulation and practices that are implemented in Mainland China, and which control the state power, government, and the relationships between the state and society. Being a socialist country, led by the working class, based on the worker-peasant union and practicing people's democratic centralism, the primary system in the country is the socialist system. The President is the head of the state of the People's Republic of China. He stays in office for a term of five years and can serve for only two consecutive terms. The Communist Party is the only party in power. 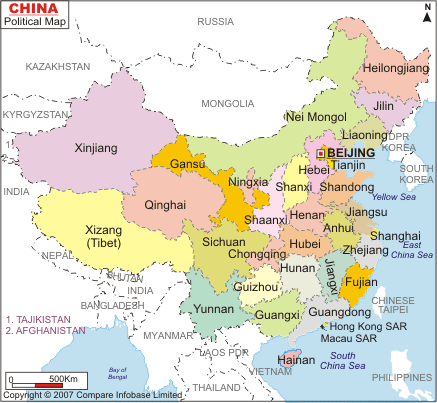