Characteristics of the Immunoglobulin (Ig) Classes 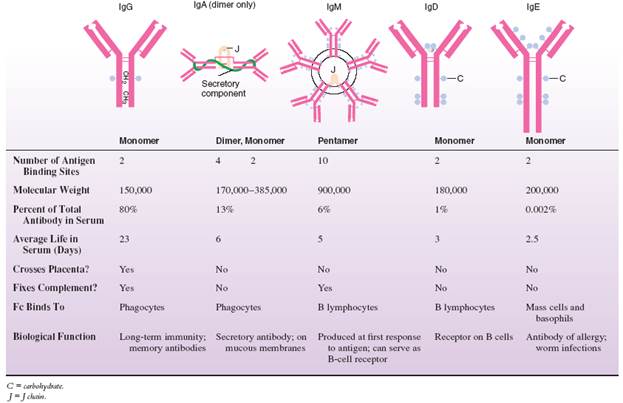 The two forms of IgAare: (1) a monomer that circulates in small amounts in the blood and (2) a dimer that is a significant component of the mucous and serous secretions of the salivary glands, intestine, nasal membrane, breast, lung, and genitourinary tract. The dimer, called secretory IgA,is formed in a plasma cell by two monomers attached by a J piece. To facilitate the transport of IgA across membranes, a secretory piece is later added by the gland cells themselves. IgA coats the surface of these membranes and appears free in saliva, tears, and mucus. It confers the most important specific local immunity to enteric, respiratory, and genitourinary pathogens. It protects newborns who derive it passively from nursing.

IgM(M for macro) is a huge molecule composed of five monomers (making it a pentamer) attached by the Fc receptors to a central J chain. With its 10 binding sites, this molecule has tremendous avidity for antigen (avidity means the capacity to bind antigens). It is the first class synthesized by a plasma cell following its first encounter with antigen. Its complement-fixing and opsonizing qualities make it an important antibody in many immune reactions. It circulates mainly in the blood and is far too large to cross the placental barrier.

IgDis a monomer found in miniscule amounts in the serum, and it does not fix complement, opsonize, or cross the placenta. Its main function is to serve as a receptor for antigen on B cells, usually along with IgM. It seems to be the triggering molecule for B-cell activation, and it can also play a role in immune suppression.

IgEis also an uncommon blood component unless one is allergic or has a parasitic worm infection. Its Fc region interacts with receptors on mast cells and basophils. Its biological significance is to stimulate an inflammatory response through the release of potent physiological substances by the basophils and mast cells. Because inflammation would enlist blood cells such as eosinophils and lymphocytes to the site of infection, it would certainly be one defense against parasites. Unfortunately, IgE has another, more insidious effect – that of mediating anaphylaxis, asthma, and certain other allergies.