Izometry is a axonometric projection with the equal indexes of distortion for all three axes. Figure 3.3,а shows a sphere in a rectangular isometric projection the diameter of which equals a metage. A corner between axes is 120°. Place this sphere into a cube ribs of which, also equal to the direction of axonometric axes (see fig. 3.3,b). Project a sphere on the verge of cube. Such type of planning is called American. The projections of the sphere on the verge of a cube are smaller in size (disfigured). That segment of coordinate ax long 1 mm in rectangular izometry will be represented the segment of axonometric ax long 0,82 mm. Correlation 1 / 0,82=1,22 times determines a coefficient down-scaling on which we increase the sphere (see figure 3.3,c). Now the projections of the sphere as ellipses are inscribed in the verge of a cube (see figure 3.3,d). The major ax of ellipse makes 1,22 diameter – D of a projection circle of the sphere (equator, frontal meridian, type meridian), and minor axis – 0,71 diameter. Place a sphere in the usual (europian) first angle projection method. Figure 3.3,e shows the correlation for determination of length of cuttings-off of major [AB] and minor [CD] axes of ellipses. Sizes of cuttings-off [1, 2] and [3, 4] equal the diameter of projected circle of a sphere, and in general case the diameter of a cylinder or a hole on a figure. While making of quaternary cuts in rectangular izometry follow to the rules resulted of hatching as shown in fig.3.3,f. Stroke lines are drawn parallell to the axonometric axes. 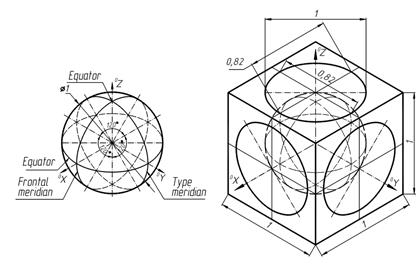