When shaping and finishing drafts it is obligatory keep strictly to demands of State Standards.

The standard sizes of a drawing sheets are given in Table 1.1.

The layout of drawing sheet is shown in Fig. 1.1. 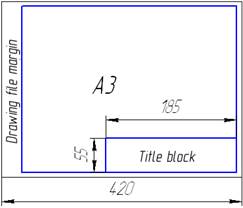 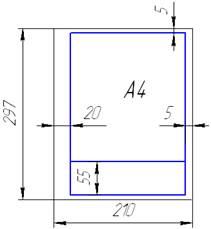 There are three forms of title block. Title block (form 1) is intended for all of cases of drawings and charts is shown in figure 1.2 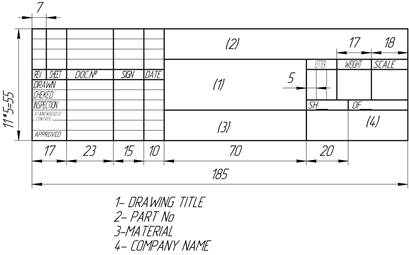 The title blocks (form 2 and form 2а) are used for the text document (specification) are shown in figure 1.3 (on the first sheets) and in figure 1.4 (on the next sheets).

Nonstandard title block can be used in doing home works in geometrical and projecting drawings (figure 1.5).

The various types of scales used in machine drawing are:

The standard scales are given in Table 1.2.

The scale is indicated in the proper column of title block on a drawing .

National Ukrainian Standards established nine types of lines according to its graphical shape and thickness. All lines of the same type must have the same thickness. For this end they sharpen pencils in shape of cone or in shape of spade and they use the proper hardness of pencils. Thus lines of s/3 thickness are recommended to draw by pencils of T, 2T, 3T (H, 2H, 3H), and lines of s, s/2 or 1,5s thickness by pencils of MT, TM (HB, BH).

The types of lines are shown in a table 1.3.

Draft fonts are obligatory when lettering the drawings by hand. National Ukrainian Standards established such dimensions of fonts in millimetres: 1,8; 2,5; 3,5; 5; 7; 10; 14; 20, 28; 40. Font 1,8 is not recommended. Four types of font are established for Russian, Latin, Greek letters, Arabic and Roman numerals. Those types of font calls A and B, and each of them may be right (without inclination), and inclined fonts with angle of 75°. For each type of font its height h is defined by height of capital letters. Height of letters is measured in millimeters along a perpendicular to the base of an inscription. Width d of font lines is defined according to type of font. For A font type d=l/14h, and for E: d=l/10h. It is recommended to make up lettering E inclined font type. Base parameters of E font type are given in table 2.

For correct lettering an auxiliary grid should be drawn by thin lines. The vertical and horizontal grid step is equal to thickness of heavying in of the font.

The main requirements for lettering are

Single stroke letters meet these requirements and are universally used. Good lettering should conform to uniformity of thickness, style, scope, size and spacing.

A variety of materials are used for making machine components. It is therefore preferable to follow different conventions of section lining for different materials as given in Table 1.4.

It is nesessaty to take the corner of 30°or 60° instead of 45° if the lines of shading coincide with the direction of the lines of contour. Narrow areas of cuts with a width less than 2 mm, allow to show blacken (figure 1.7).