Once water and salts have been removed from the crude oil, the refinery is ready to begin sorting its molecules. The principal sorting technique is distillation. Distilla­tion is described in the supplement on water purification, but here the job is somewhat different. In uater purification, the goal is to separate a volatile chemical (water) from a nanvolatile chemical (salt) and the only molecule that becomes a gas at reasonable temperatures is uater. But in petroleum distillation, almost all of the molecules can become gaseous in the right circumstances. So the refinery must carefully adjust those circumstances in order to collect particular groups of molecules from the mixture.

The crude oil leaving the water separator is heated and then injected near the bot­tom of a tall distillation tower. This tower contains a series of collecting trays, one above the other. The temperature inside the tower is carefully controlled so that it's highest where the crude oil enters the tower and gradually decreases from the bottom to the top of towe. Thus each collecting tray is a little cooler than the one beneath it.

As the hot oil enters the tower, all but the largest molecules evaporate and become gas. This gas gradually ascends the tower and its temperature decreases. With each de­crease in temperature, the molecules in the gas find it more difficult to stay apart. The larger molecules in the gas begin to stick to one another and form liquid in the tower's trays. Some of this liquid drips down from each tray to the tray below. Overall, gas moves up the tower from below and liquid drips down the tower from above.

However this concentrating process doesn't produce pure chemicals. The liquid in a particular tray still contains a number of different molecules. While one range of sizes is most likely to accumulate in that tray, it will also contain some smaller and larger molecules that manage to find their way into the liquid. In general, nature always tries to maximize the randomness of a liquid The same statistical rules that govern the flow of heat and are responsible for the laws of thermodynamics also make it very difficult to purify chemicals completely.

Unlike oil and water, these hydrocarbon molecules mix easily with one another. They all stick together with van der Waals forces, regardless of how large their mol­ecules are. Chemical such as these that dissolve freely in one another are said to be miscible. While the smaller molecules will tend to evaporate from the liquid more easily than the larger molecules, they are all pretty much equal in the liquid itself.

Crude oil's first trip through a distillation tower separates it into several parts, in­cluding diesel oil, kerosene, and raw gasoline. The diesel oil and kerosene are basically ready for consumer products, but the raw gasoline is not It has a very low octane num­ber and must be reformed and blended before it's ready for automobiles. Molecules that are too small to become liquid even at room temperature reach the top of the tower and are processed into propane and LP gases.

The largest molecules that enter the distillation tower rarely become gaseous below 300 °C and drip as a liquid to the bottom tray. It might seem reasonable to heat this re­sidual liquid to a higher temperature to separate its molecules from one another. Unfor­tunately, temperatures above about 360 °C cause hydrocarbon molecules to decompose into fragments, a phenomenon called cracking. These fragments can then recombine to form gums that plug up the distillation equipment. To avoid cracking, the distillation columns must avoid excessive temperatures.

While the molecules in the residual liquid can still be separated by distillation, that dis­tillation must be performed at very low pressures in a vacuum distillation tower. The residual liquid from an atmospheric pressure tower is reheated to 350 °C and fed into a vacuum tower near its base. Gases move upward while liquid moves downward and each tray accumulates those molecules that can be either gaseous or liquid at its particular temperature.

Because the pressure and density of the gas are reduced in the vacuum tower, mol­ecules don't have to be very volatile to become a gas. Since forming a thin , low pressure gas of lubricating oil molecules is much easier than forming a dense, high pressure gas of those same molecules, it occurs at a much lower temperature. Thus the vacuum distillation column is able to separate various lubricating oils and waxes from molecules that simply aren't volatile. The residual liquid leaving the bottom of the vacuum column is asphalt

The hydrocarbon gases that reach the top of the at­mospheric pressure distil­lation column must still be separated according to mo­lecular size. As usual, this separation involves distilla­tion, but this time the distil­lation is done at high pres­sures and relatively low temperatures. By squeezing the gas molecules close to­gether, the refinery encour­ages them to spend time as a liquid and they drift up­ward as gas and downward as liquid. Trays near the bottom of the high pressure tower accumulate liquid butane, those near the middle of the tower accumulate liquid propane, and ethane and methane drift to the top of the tower. 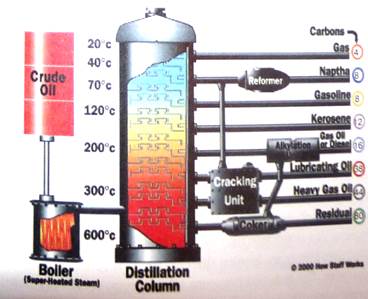 The temperature in a distillation tower decreases from the crude oil inlet to the top of the tower. Liquid extracted from trays at various heights and temperatures contain different mixtures of molecules, and are appropriate for different petroleum products.

Inside a distillation tower is a series of trays, each one cooler than one below it. Gaseous oil molecules bubble up through each tray from below. As they do, the larger molecules condense into liquid. The liquid in each tray is different, with lower trays containing larger molecules than upper trays.