House of culture and science 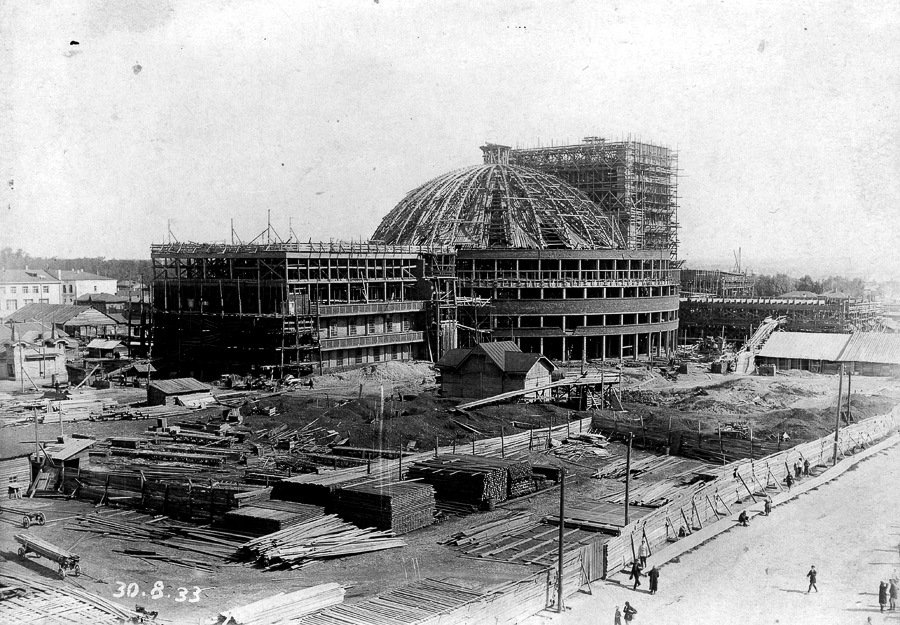 House of Science and Culture originally designed by Alexander Z. Grinberg and Innokentii V. Kirensky in 1930 consisted of six buildings connected via passages. The buildings included a 3,000-seat theater, a 750-seat concert hall, a museum, a library, an exhibition building and a research institute. Only the theatrical portion of the conceived complex was realized. A theater was at the time considered as the most accessible tool of socialist propaganda. In 1930, after competitions for projects of theater buildings in Rostov-na-Donu and Kharkov, Traugot Ya. Bardt and Mikhail I. Kurilko were included in the design team for Novosibirsk Theater. They developed a special system of «Teomass» for it. The building was supposed to become a theater of technology and real atmosphere (air, water, car, tractor, etc.). Spectators were to see columns of marchers coming from outside, cars, tractors or carriages moving at high speed, circular platforms could at the same time move in the opposite direction. With the use of a special 360° film projector films were to be projected on the inner surface of the cupola during performances. Pioneer scenographic ideas of Traugot Ya. Bardt and Mikhail I. Kurilko were expressed in the transforming auditorium capable of turning into a round amphitheater for circus and special theatrical performances. A conveyor-gallery was planned around the stage and under the amphitheater. This conveyor was meant to ensure a fast change of scenery and transferring the action into different parts of the auditorium. Alexander Z. Grinberg started construction of the building in 1931, according to a new preliminary project and Mikail T. Smurov, and based on sketches byTraugot Ya. Bardt and Mikhail I. Kurilko. The reinforced concrete cupola of Novosibirsk Theater was an outstanding construction for the time. Professor Peter L. Pasternak and engineer B.F. Materi designed it, but they refused to make a technological scheme of the cupola erection for Novosibirsk's severe conditions. A young local engineer Sergei A. Polygalin developed the scheme and erected the cupola. It was a unique construction. The cupola was 60 m wide and 25 m high. However its thickness was only8 cm, which equals 1/750 of the diameter. The designers thus managed to achieve almost the highest limit in the rational use of reinforced concrete as a material. In 1933 the Constructivist forms of the House were criticized, but Alexander Z. Grinberg refused to radically «enrich» the building's architecture. Therefore a competition for the building's exterior was announced. In 1934, after holding two competitions, architect Boris A. Gordeev, whose project won the second round of the second competition, was sent to Alexei V. Shchusev's 2nd architectural studio of Moscow City Council for further development of the project. There he made the final version of the project on the basis of G.M. Dankman's technological scheme with the collaboration of Alexander V. Kurovsky and, later, V.S. Birkenberg. In 1935 reconstruction of the building to an ordinary theater started. To improve the building's acoustics a wooden ceiling was hung from the reinforced concrete vault. The carrying capacity of the auditorium was reduced from 2,500 to 1,900 people. An ordinary, but huge scenic box was constructed. A gigantic, twelve-column portico appeared on the facade. As a result of numerous alterations, the building has so many unnecessary rooms, that their area equals to several auditoriums. Huge volumes of the auditorium and the stage, exceeding the usual norms, impaired the acoustic properties of the building, crucial for an opera theater. The problem of providing the main auditorium with a good acoustics has not been resolved till now. In 1937 the model of Novosibirsk Opera and Ballet Theater was exhibited at the Exposition Internationale des Arts et des Techniques in Paris. The project won the Grand Prix of thе exhibition. The same year Sergei A. Polygalin, the chief construction engineer for the project, was exiled. In 1938 Traugot Ya. Bardt, the originator of the «Teomass» system, was arrested. The building was called the biggest and the unhappiest child of Constructivism. 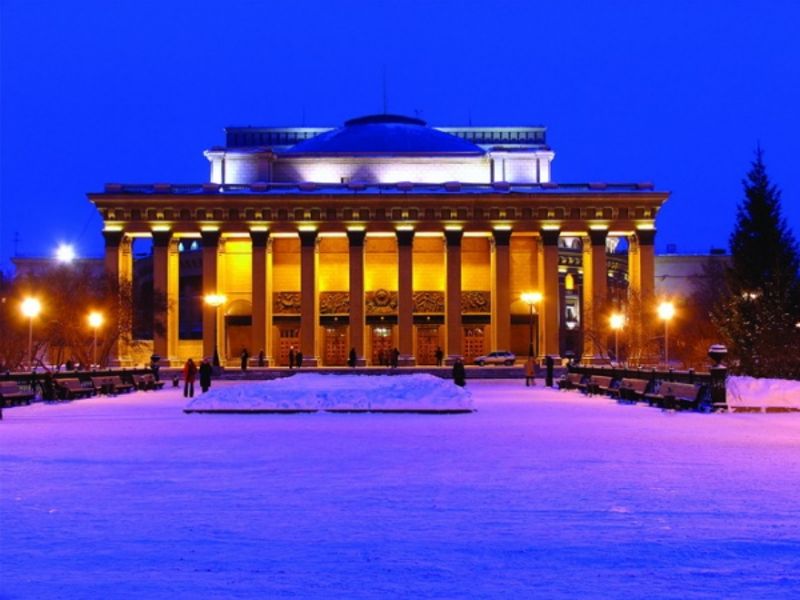