Beam bridges.All bridges need to be secure at the foundations and abutments. In the case of a typical overpass beam bridge with one support in the middle, construction begins with the casting of concrete footings for the pier and abutments. Where the soil is especially weak, wooden or steel piles are driven to support the footings. After the concrete piers and abutments have hardened sufficiently, the erection of a concrete or steel superstructure begins. Steel beams are generally made in a factory, shipped to the site, and set in place by cranes. For short spans, steel beams are usually formed as a single unit. At the site, they are placed parallel to each other, with temporary forms between them so that a concrete deck can be cast on top. The beams usually have metal pieces welded on their top flanges, around which the concrete is poured. These pieces provide a connection between beam and slab, thus producing a composite structure.

For longer spans, steel beams are made in the form of plate girders. A plate girder is an I beam consisting of separate top and bottom flanges welded or bolted to a vertical web. While beams for short spans are usually

Arch bridges.Arches are normally fabricated on-site. After the building of abutments (and piers, if the bridge is multiarch), a falsework is constructed. For a concrete arch, metal or wooden falsework and forms hold the cast concrete and are later removed. For steel arches, a cantilevering method is standard. Each side of an arch is built out toward the other, supported by temporary cables above or by falsework below until the ends meet. At this point the arch becomes self-supporting, and the cables or falsework are removed.

Suspension bridges.When bridges requiring piers are built over a body of water, foundations are made by sinking caissons into the riverbed and filling them with concrete. Cassions are large boxes or cylinders that have been made from wood, metal, or concrete. In the case of suspension bridges, towers are built atop the caissons. The first suspension-bridge towers were stone, but now they are either steel or concrete. Next, the anchorages are built on both ends, usually of reinforced concrete with embedded steel eyebars to which the cables will be fastened. An eyebar is a length of metal with a hole (or "eye") at the ends. Cables for the first suspension bridges were made of linked wrought-iron eyebars; now, however, cables are generally made of thousands of steel wires spun together at the construction site. Spinning is done by rope pulleys that carry each wire across the top of the towers to the opposite anchorage and back. The wires are then bundled and covered to prevent corrosion. When the cables are complete, suspenders are hung, and finally the deck is erected—usually by floating deck sections out on ships, hoisting them with cranes, and securing them to the suspenders.

Cantilever bridges.Like suspension bridges, steel cantilever bridges generally carry heavy loads over water, so their construction begins with the sinking of caissons and the erection of towers and anchorages. For steel cantilever bridges, the steel frame is built out from the towers toward the centre and the abutments. When a shorter central span is required, it is usually floated out and raised into place. The deck is added last.

The cantilever method for erecting prestressed concrete bridges consists of building a concrete cantilever in short segments, prestressing each succeeding segment onto the earlier ones. Each new segment is supported by the previous segment while it is being cast, thus avoiding the need for falsework.

Cable-stayed bridges. Construction of cable-stayed bridges usually follows the cantilever method (see Figure 13). After the tower is built, one cable and a section of the deck are constructed in each direction. Each section of the deck is prestressed before continuing. The process is repeated until the deck sections meet in the middle, where they are connected. The ends are anchored at the abutments. 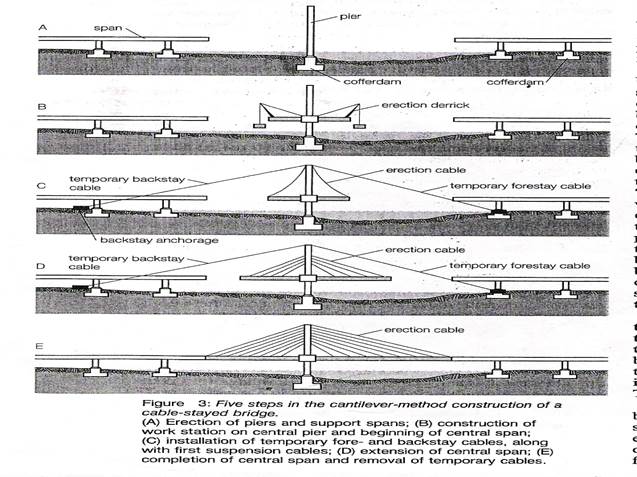 Wood and stone.Wood is relatively weak in both compression and tension, but it has almost always been widely available and inexpensive. Wood has been used effectively for small bridges that carry light loads, such as footbridges. Engineers now incorporate laminated wooden beams and arches into some modern bridges.

Stone is strong in compression but weak in tension. Its primary application has been in arches, piers, and abutments.

Iron and steel.The first iron used during the Industrial Revolution was cast iron, which is strong in compression but weak in tension. Wrought iron, on the other hand, is as strong in compression as cast iron, but it also has much greater tensile strength. Steel is an even further refinement of iron and is yet stronger, superior to any iron in both tension and compression. Steel can be made to varying strengths, some alloys being five times stronger than others. The engineer refers to these as high-strength steels.

Concrete.Concrete is an artificial stone made from a mixture of water, sand, gravel, and a binder such as cement. Like stone, it is strong in compression and weak in tension. Concrete with steel bars embedded in it is called reinforced concrete. Reinforcement allows for less concrete to be used because the steel carries all the tension; also, the concrete protects the steel from corrosion and fire. Prestressed concrete is an important variation of reinforced concrete. A typical process, called post-tensioned prestressing, involves casting concrete beams with longitudinal holes for steel tendons—cables or bars—like reinforced concrete, but the holes for the tendons are curved upward from end to end, and the tendons, once fitted inside, are stretched and then anchored at the ends. The tendons, now under high tension, pull the two anchored ends together, putting the beam into compression. In addition, the curved tendons exert an upward force, and the designer can make this upward force counteract much of the downward load expected to be carried by the beam. Prestressed concrete reduces the amount of steel and concrete needed in a structure, leading to lighter designs that are often less expensive than designs of reinforced concrete.