Bridge Construction (According to the Types).

There is nothing especially complicated about the lifting process, and the stresses in the beam are more or less as they will be in the final position. Nevertheless, a heavy object suspended in space is potentially dangerous, and accidents do happen. During the lifting of the suspended span of the Quebec bridge, something broke, and the span fell into the river and was destroyed. During the lifting of one span of the Britannia bridge, a jack burst, and the end of the span fell. Fortunately, Stephenson had given strict orders to insert packing after every few inches of lifting. Nevertheless, a slight distortion of the beam did occur. The incident shows the importance, not only of correct instructions, but of good communications. Accidents have happened because instructions were not received, or if received, modified or ignored. An exception of the method of lifting may be adopted in the case of the suspended span of a cantilever bridge, as in the case of the Forth railway bridge. Here, the beams were built out from the ends of the cantilever arms until they could be joined in the middle. Only then were the temporary rigid connections removed. Such an operation has to be done with great care, because large stresses are released and created. The bending moment at the join completely disappears, for example, while the stress in the top chord of the beam changes from tension to compression. Some continuous box girder beams and concrete beams are constructed as cantilevers until they are joined up. New parts may be taken along the existing part of the bridge, or they may be lifted up from below. Sections of a segmented prestressed concrete bridge may be lifted by a crane which rests on previously attached segments, or they may be manipulated by means of a launching girder which is slowly advanced along the already built part of the span. Another method is to use moving formwork which progresses with the construction. Because the cantilevered part span is subject to stresses for which the complete span is not designed, temporary stays are sometimes attached between the segments and a temporary tower, turning the span into a cable-stayed one until closure is complete.

Yet another technique, when the lower surface of the span is horizontal, is to rest the formwork on the steel girder which reaches to the next pier. The casting of each segment is often done using the previous segment as a part of the formwork. This technique, called match-casting, ensures an almost perfect fit at assembly time, and greatly reduces the tendency for misalignments to occur during erection. A film of epoxy may be spread between segments. After each segment is placed, steel pre-stressing wires, or tendons, are fitted to hold it in position. The pre-stressing tension prevents the concrete ever reaching a tensile state with any foreseeable load. This method of pre-stressing is called post-tensioning, because the stress is added after placement. When the wires are tensioned before the concrete is poured, the process is called pre-tensioning. The tendons are equivalent to the ties in the lattice truss, while the concrete is roughly equivalent to the struts. Thus the concrete and the steel are both used in the roles for which they are best suited.

The joints between the concrete segments are subject to vertical shear forces, which can be resisted by the use of matching corrugated surfaces.

Caisson in building, is a watertight chamber used in the construction of building foundations, bridges, tunnels, and other structures. Caissons provide an area in which construction crews can safely work underground or underwater. Caissons also may be filled with concrete and become part of the finished structure.

Most caissons have the shape of a cylinder or a box. The walls may be made of steel, concrete, or timber. All caissons are open at the bottom, where digging takes place. But they may be open or closed on top. The two main types of caissons are open and pneumatic. An open caisson has an open top and bottom. The bottom edges, called cutting edges, are constructed so they can cut into the ground. The caisson sinks deeper into the ground as earth is removed beneath it.

A pneumatic caisson is closed at the top. It uses compressed air to keep water out of the working chamber and to provide oxygen for the workers. This type of caisson consists of two sections. The lower section, where the workers are, has cutting edges like those of open caissons. Concrete is poured into the upper section. Its weight helps drive the caisson deeper into the ground. Workers and materials move in and out of the lower section through a shaft. Pneumatic caissons are usually used to support bridge piers that are located in deep water.

Before workers enter a pneumatic caisson, they must step into a large airtight chamber called an air lock. The outer door is closed, and the air pressure in the air lock is gradually increased until it is the same as the pressure in the working chamber. When workers prepare to leave the caisson, they again pass through the air lock and the pressure is gradually reduced. If workers go through a change of pressure too quickly, they may develop bends, a painful condition also known as caisson disease. Bends can be fatal in some cases. 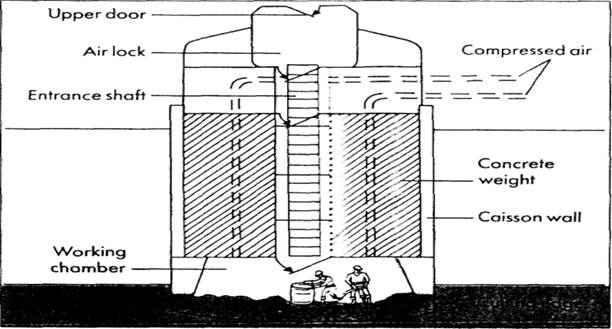