Newton’s study of prophecy begins in the early 1670s and with many of these manuscripts he continued to work on them for over 10 and sometimes up to 20 years (for instance, Newton: c 1675s – 1685s; Newton: c 1670s – 1680s), making it very difficult to date the work within the manuscript with any precision. His main interest was in the prophets of Ezekiel, Daniel and the Book of Revelation. In these prophecies the Temple of Jerusalem was the stage in which the prophecies were acted out. At times his use of the expression the ‘Temple of Solomon’ seems interchangeable with the ‘Temple of Jerusalem.’ Although Newton’s study was of the Temple of Solomon, he examined the Temple in all its later stages, ie the Temple of Zerubbabel and Herod, which he used to derive his plan of Solomon’s Temple.

His work on Solomon’s Temple began in the late 1670s in his study of the Book of Revelation (Newton: c 1670s – 1690s). In this manuscript he discussed the measurements of the Temple from the pagan writer Hecataeus, Maimonides, Philo, the works of Josephus and the Book of King and Ezekiel in both the Vulgate and the Septuaginta, the Talmud and the work of Villalpando. An appendix also discusses the measurement of the sacred Hebrew Cubit of the Temple and is entitled ‘De magnitudine cubiti sacri’. This is a comprehensive study of the unknown length of this sacred Hebrew Cubit. This study included a wide range of ancient and modern sources including John Greaves, Polybius, Suetonius, Pertius Vicentiniss, Philandrier, Donatus, Vitruvius, Villalpando and many others. A refinement of this appendix was posthumously reprinted as “A Dissertation Upon the Sacred Cubit of the Jews” in 1737. However, this refinement does not survive in manuscript form. It is a complex and an ingenious paper which uses ancient measurements, as well as measurements taken from the Egyptian pyramids by Greaves in the early 17th century (Greaves: 1646). The paper uses a system of limits of all of these ancient measurements for different cubits of the time i.e. Memphis, Arabian, Mesopotamian, Babylonian, Egyptian, Greek and Roman Cubit, until he derives a measurement for the Sacred Hebrew cubit of 2.068 English feet. However, at the end of the paper Newton had to discard some of his measurements to keep it consistent with the measurements from Biblical sources and since the ones he discarded was his original standard for the cubit, the paper is fundamentally flawed (Morrison: 2011, 63 – 72).

These earlier works on the Temple did not include any drawings nor did they consider the three-dimensional aspect of the building to any great extent. Although Vitruvius’ interpretation of the Roman and Greek cubit are mentioned in the appendix, his architectural norms are not mentioned in the description of the Temple from this manuscript. This description of Solomon’s Temple was repeated and developed in several other manuscripts; however, the study of the cubit was reduced only to a commentary on Josephus’ measurements of the Temple (Newton: c 1690) in these later manuscripts and the study of the cubit was never revisited.

Newton’s study on Solomon’s Temple, culminated in a work entitled Prolegomena ad Lexici Propretici partem Secundam: De Forma Sanctuary Judaici (Babson Ms 434) (Introduction to the Lexicon of the Prophets, Part Two: About the Appearance of the Jewish Temple). The curious title is more or less in isolation although it is possibly the larger study begun by Newton and never brought to fruition. In a manuscript, Treatise on Revelation dated mid-1680s, a table of contents is given for a proposed structure for The First Book Concerning the Language of the Prophets consisting of five books but omitting Book Two. There are ten titles of chapters in the first book and the tenth chapter is entitled ‘Of the parts of the Temple’ (Newton: mid – 1680s, 4r). However, there is no surviving Book Two; after ‘Of the parts of the Temple,’ is the list of chapters for the third book. This leaves the question ‘was Book Two going to be the reconstruction of the Temple’? The Treatise on Revelation manuscript is dated around the same date as Babson Ms 434, so it does make this a possibility.

The sources of Babson Ms 434 are exceptionally wide and show an intense study using ancient and contemporary sources. Babson Ms 434 was written in four languages, the primary language being Latin, with some quotations in Greek, a few small expressions in Hebrew and one paragraph in English, which is written as marginalia in the main floor plan. He cited a wide range of Biblical texts, the Greek text Septuaginta, texts in Hebrew and Vulgate Latin, the Alexandrian Codex and the Arabian version. In addition he references: Flavius Josephus Antiquitates Judaicae (Antiquity of the Jews), Bellum Judaicum (The Jewish Wars) and Contra Apionem (Against Apion); Philo, Upon the Monarchy; Maimonides, De Apparatu Templi (Apparatus Temple) and Tratado Sobre el culto Divino (Treaty upon the divine worship); Constantino L’Empereur, Talmudis Babylonici Codex Middoth sive De Mensuris Templi; Arias Montano, De mensuris (Upon them Measured); Johannes Buxtorf, Lexicon Talmud; and Walton, Bible Polyglotta. He also mentioned Villalpando’s reconstruction of the Temple of Solomon and Cappel’s commentary on Villalpando in Trisagion sive Templi delineatio triplex Hierosolimitani, in Brian Walton’s, Biblia Sacra Polyglotta. Cappel and Drusius are mentioned together without any reference, and finally Vitruvius and his norms and proportions of architecture are mentioned.

Newton’s referencing of traditional Hebrew texts does bring into question his knowledge of Hebrew. Westfall claimed that Newton “learnt Hebrew in order to read Ezekiel in the original (Westfall: 1980, 346)”. José Faur suggested that eminent Jewish scholar Isaac Abendana was Newton’s Hebrew teacher (Faur : 2004, 218) and that Abendana instilled into Newton his interest for Maimonides and Jewish measurements (Faur : 2004, 219). Frank E. Manuel believed that Newton could only use Hebrew with the aid of a dictionary (Manuel: 1974, 84), and Mat Goldish claimed that Newton read only ‘some’ Hebrew (Goldish: 1998, 18). Although he possessed five Hebrew texts in his library (Harrison: 1978, 74) he does not quote verses or passages in Hebrew from the Jewish scholar Maimonides or the Talmud. He only quoted small expressions in Hebrew of no more than four words, but mostly he was only emphasizing an individual word. This indicates that his understanding of Hebrew was limited and he required the aid of dictionaries and lexicons which were evident in his library (Harrison: 1978, catalogue numbers 321and 322). On the other hand he used the Yiddish expression ‘Talmudists (Newton: 1737, 421)’ for Talmud and the Hebraized spelling ‘Noach’ for Noah (Goldish: 1998, 43). It would appear that although Newton was familiar with Hebrew, he was never truly confident with it.

In the seventeenth century, Maimonides was the most translated and respected Jewish scholar. Christian Hebraism had become a developing interest in the sixteenth and seventeenth centuries. Hebrew learning was only for the highest academic circles and there were a large number of lexicons, grammars, dictionaries and Bibles available to these elite scholars. Newton had a wide range of Jewish literature available to him in Latin and Greek, and the Maimonides in his library are translations into Latin by L. de Compiègne de Viel (Harrison: 1978, Catalogue numbers 1018 and 1020). Furthermore he used the Latin titles in his references to these books. His knowledge of the Jewish text the Middoth[iii]appears to have come from Constantinus L’Empereur whom he referenced (Newton: 2011, 124 & 133); however, this is not in his library.

Newton made extensive use of Josephus’ description of the Temple. In many commentaries and reproductions these same passages are used to confirm various reproductions, but Newton’s examination of Josephus is far more extensive than most. The measurements are considered in great detail and he compared them with the Talmud and equated them to Ezekiel’s measurements. Newton also commented on Josephus and noted that Josephus and Philo had both seen the Temple of Herod and had days of worship there, which gave them a better understanding of the building and the rituals, while the experts of the Talmud had not seen it, which sometimes lead them into error (Newton: 2011, 120 – 121) .

Several references are made to Villalpando’s reconstruction of Solomon’s Temple. From the text it appears that Newton’s knowledge of Villalpando came from the criticism by Louis Cappel in Brian Walton’s Prolegomena of the Biblia Polyglotta, which was to be found in Newton’s library (Harrison: 1974, catalogue number 216). In the first part of Cappel’s treatise he included abstracts from Villalpando’s reconstruction in Ezechielem Explanationes and he also included small scale engravings of his design by Wenceslaus Hollar. Ezechielem Explanationes was an extremely expensive three volume set with large fold-out engraving of very high quality. Villalpando’s reproduction of the Temple of Solomon became widely known through Cappel’s treatise rather than the original text (Herrmann: 1969, Note.24).

Newton was clearly familiar with Book III chapter III ‘The Proportions of Intercolumniations and of Column’ in De Architectura by Vitruvius. Yet there was no Vitruvius in his library or any other commentary on Vitruvius. Thus it is difficult to know whether his comments on and relating to the Vitruvian proportions are directly from Vitruvius or from one of the commentators on Vitruvius, such as Leon Battista Alberti, Sebastiano Serlio, Daniele Barbaro or any other commentary that was available in the later seventeenth century. However, he does quote Vitruvius’ Book Three De Architectura on measurement in A Dissertation upon the Sacred Cubit of the Jews using these proportions but at the same time constructing his own ‘Vitruvian’ man from ancient Jewish sources so that instead of the human figure inside a circle and a square the Newtonian man is in an oval and a rectangle (Morrison: 2010).

To complete his plan, he first executes a scriptural exegesis of the verses of Ezekiel 40:5 – 42:15 and 46:19. Verse by verse he scrutinized the dimensions of the gates and the interior and exterior atriums with their colonnades. From this he maps out the floor plan of the Temple. He integrated the rituals performed in the Temple as another way of justifying the floor plan of the Temple. He examines the ancient accounts of all the temples of Jerusalem, not only Solomon’s. He integrates all and refutes contemporary accounts of the Temple. After describing the ancient descriptions of Temple of Zerubbabel and Herod strips away what he considers to be additions to derive a three-dimensional plan of Solomon’s Temple. The manuscript remained incomplete as he continued with discussing the rituals and use of the Temple. However, he does complete his reconstruction of the Temple (see Figure 3 for Newton’s sketch of the ground plan of the Temple in Babson Ms 434 and Figures 8, 9 & 10 for an architectural model constructed by the author from the description in Babson Ms 434). 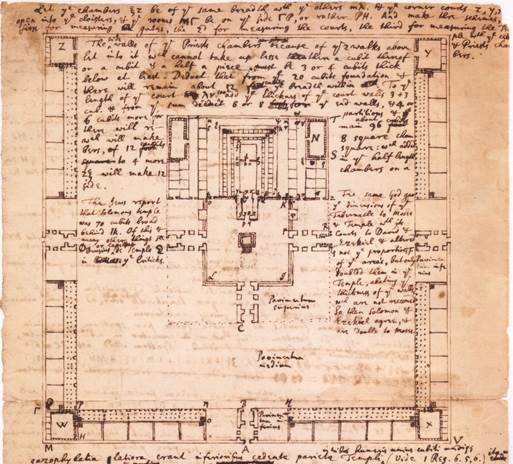 Figure 3: Image of the ground plan from Babson Ms 0434 (with kind permission of The Huntington Library)

The dating of this Babson Ms 434 cannot be precise. The dating of his manuscripts is made very difficult by Newton’s recycling of receipts and letters as paper; he appears to have kept paper for decades so the dates of the letters or watermarks can give no indication of the date of the manuscript (Manuel: 1963, 17). However, it has been dated circa 1685 by Richard Westfall and 1690, and possibly much later by Ciriaca Morano (Ixviii). Both dates are possible, although the two reconstructions do indicate that the manuscript was written over time. so that 1690s date might be the more possible completion date but it is unlikely that this manuscript is much later, since there is a significant change in Newton’s writing and attitude to the Temple, and Babson Ms 434 is closely related to the earlier manuscripts. The main change in Babson Ms 434 from the earlier manuscripts is the addition of the study of the architecture and the reconstruction. Like the study on the cubit he did not revisit his architectural studies.