Leon clearly intended an extensive visit and was armed with introductions to the Court, the scientific and religious communities.

Leon rejected Ezekiel as a source for the Temple of Solomon and used Josephus Antiquitates Judaicae and Bellum Judaicum, I Chron, I Kings and the Midot as his main sources. Leon disagreed with Villalpando and he claimed that the Temple needed to be considered in the Jewish tradition. Although Villalpando’s reconstruction had been built to the norms of architecture, the book according to Leon was more concerned with theology, rather than a literal interpretation of the architecture. Leon’s emphasis was the Temple made by man, for the worship of God, not the God given plan that Villalpando had stressed. Yet looking at Leon’s Temple foundations they are exactly the same as Villalpando’s (compare Figures 4 & 5). Thus Villalpando did have some influence on Leon and although the plan is different, the style of the architecture is very similar to Villalpando. Unfortunately Leon’s models no longer exist.Although there are images of his Temple reconstruction he did not provide a floor plan of the Temple precinct to accompany the description in his books. Leon died in September 1675 and there is no record of any visit to London by him, although there is no doubt that he intended to go. However, the model was exhibited for at least five years. 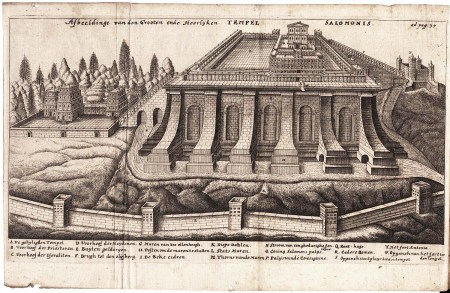 The builder of the Schott model is unknown. It was completed for Hamburg city councillor Gerard Schott (1641-1702) in 1690s. Schott’s heirs sold the models to Mr Combrecht Con (Ryland, 1882, 414), who was reported to be an Englishman, the year of this sale is not known. Combrecht Con brought the model to London perhaps to find a buyer for the model. Although the newspapers at the time claimed that King George I was to purchase the model, nothing eventuated. However, within a couple of weeks of the model arriving in London it went on public display. Advertisements for the exhibition of the Schott model were placed in many of the daily newspapers.

The Temple of Solomon, lately brought over for Hamburg, which his majesty not long ago was pleased to see with great satisfaction, is every Day to be seen from eleven to Three-a-clock, in the Long Room of the Opera House in the Hay-Market. The complete masterpiece for its excellent architecture exact and perfect symmetry, and richness in gold, silver, jewels, carving and figures, has not its like in the universe; there being above 6700 pillars, 1500 chambers, and windows in proportion to be seen conforming to the original. The printed description of it, with several fine cuts, is to be had at the same place, at five shillings the book. The price for seeing the Temple is half a guinea. Every particular will be shown and explained by some persons attending there for that purpose. And whereas it is supposed that those who are curious in architecture and antiquity would be glad to see it more than once, the owner gives notice that those who pay a guinea shall see it as often as they please for the same (Anonymous, 1724, 2).

At a guinea entrance fee, the exhibition was for a very elite audience. Later advertisement described the size of the model as being “13 foot high and 80 foot round (Anonymous, 1730).” The model was built to impress and 20 x 20 x 13 feet (6.096 x 6.096 x 3.963 metres) is a vast model (see Figure 6)! Despite the mention of several fine cuts, presumably etchings, the printed description is not illustrated. Nevertheless, it was only a couple of months before two large prints 3 feet 3 inches high and 2 feet wide (1 x 0.61 metres) of the Hamburg model were being advertised and sold by engravers in London (Anonymous, 1725, 2).

In 1727, in the new reign of King George II it was again rumoured in the newspapers that “We hear his majesty has purchased the famous model of the Temple of Solomon brought from Hamburg in the last Reign, and shown at the Hay Market, to make a present of it to one of the universities (Anonymous, 1728, 2).” However, this proved to be untrue, but it was known that the model was for sale. It remained on exhibition until the 1732 when it was purchased by Elector Friedrich August of Saxony who was King of Poland and Grand Duke of Lithuania. The model exchanged hands several times through the centuries and is now on display in the Museum für Hamburgische Geschichte (Korey, 2010, 35).

During the eight years that this model was on display in London the price of admission did eventually go down to 2 shillings; however, it was continuously patronised by the public and a significant number of the guidebooks from the exhibition still exist.

Figure 6: The Schott model drawn by the author.