Edinburgh is the capital of Scotland, and Glasgow is the largest city.

Scotland occupies the northern third of the island of Great Britain in the British Isles. Most of Scotland is mountainous. Its rugged mountains, green valleys, and deep, blue lakes provide some of the most beautiful scenery in Europe.

Most of the Scottish people live in the central part of Scotland, where there is flatter and more fertile land. Many Scots work in the service and manufacturing industries, which form the basis of the Scottish economy.

The Scottish people have long been famous for their close-knit clans (groups of related families), colorful plaid kilts, and skill as fierce warriors. The word clan refers to groups of people in early Scotland and Ireland who had common ancestors and a common name, and were organized under the rule of a chief. These clans were bilateral (related through both men and women), and marriage within the clan was customary. The Scottish clans began about A.D. 1000. They carried on feuds in the Highlands, and clan members were expected to defend one another. Most clans lost power after the rebellion of 1745, but a spirit of clan loyalty remains among Scots. They are distinguished by their names--such as MacDonald and Campbell--and by their tartans, the plaids worn as emblems of clan membership. But the clans have lost much of their importance, kilts are worn mainly for ceremonial occasions, and no war has been fought in Scotland for more than 200 years. 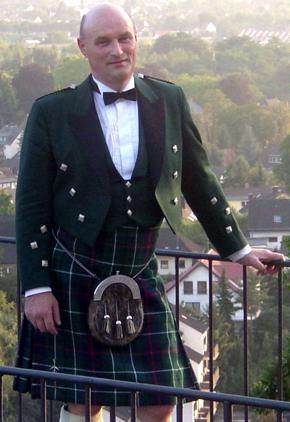 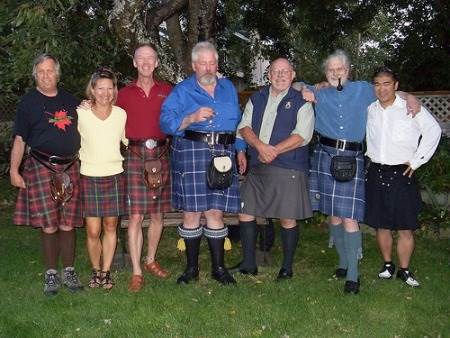 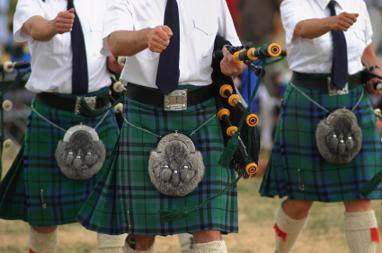 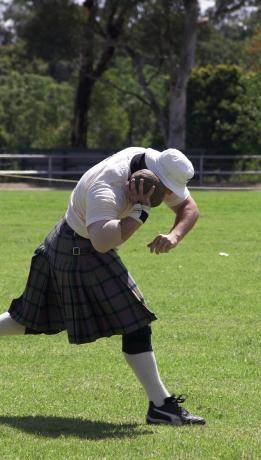 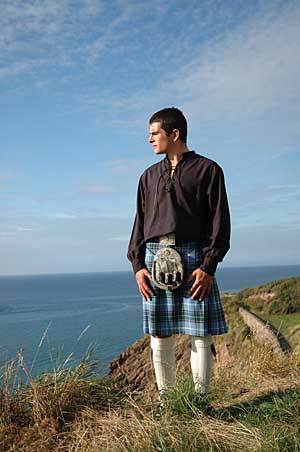 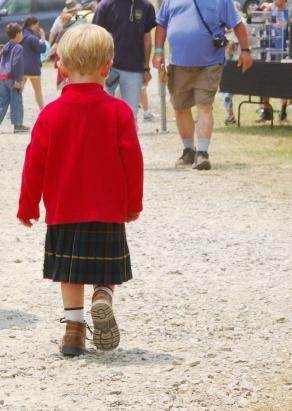 Population. Scotland has a population of more than 5 million (5,295,000). About three-fourths of the people live in the lowlands of central Scotland, a region that makes up only about a sixth of Scotland's mainland. The rugged Highlands and the hilly uplands of southern Scotland are more sparsely populated. The Highlands, which cover about two-thirds of the Scottish mainland, have some of the most thinly populated areas in Scotland. Less than 2 percent of the people live in Scotland's three island authority areas of Orkney, Shetland, and the Western Isles.

One of Scotland's major problems has been emigration. Particularly in the 1960's, thousands of people left Scotland because of limited job opportunities. But new industries, such as the production of oil from the North Sea, have helped provide more jobs.

Ancestry. Most Scottish people are descended from peoples who came to Scotland thousands of years ago. These groups included the Celts, Scandinavians, and a Celtic tribe from Ireland called the Scots. Each group influenced Scottish civilization.

Language. English is the official language throughout the United Kingdom. In Scotland, English is spoken in a variety of dialects.

About 80,000 Scots speak Gaelic, an ancient Celtic language. Most of these people live in the Highlands or on the islands west of the mainland.

Industrialization has eliminated many of Scotland's old traditions and ways of life. Many fortified castles still stand in Scotland, remnants of its warlike past. But day-to-day living in Scotland is becoming more like that in other parts of the United Kingdom and Europe. Today, most Scots are wage earners who live in or near cities.

City Life. More than three-fourths of Scotland's people live in towns and cities. A handful of the cities have populations of more than 100,000. Glasgow, Scotland's largest city, has about 655,000 people. About 421,000 people live in Edinburgh, the capital. Aberdeen has a population of about 201,000 and Dundee about 166,000.

Small homes, row houses, and apartment buildings made of stone are common in Scotland's cities. Many Scottish cities developed around coal mining and heavy industry during the 1800's and early 1900's. Much of the housing then was of poor quality. But after World War II ended in 1945, the government began extensive efforts to improve living conditions in Scotland. It replaced much of the housing with modern, government-owned dwellings. The district councils and island authority councils own the government dwellings, which are called council houses. By the 1990's, privately owned housing was becoming more popular than government-owned housing in Scotland.

Crowding and pollution are rare in Scottish cities, partly because Scotland's heavy industry has declined. Glasgow ranked as a great industrial and commercial center in the late 1800's and early 1900's. It was known as the Second City of the British Empire, London being the first city. Five new towns, including East Kilbride and Cumbernauld, were built in the Central Lowlands to ease crowding in Glasgow. Although much heavy industry closed in the mid-1900's, new industries in light manufacturing and other fields have developed, keeping Glasgow and the Central Lowlands the industrial center of Scotland. But some towns in the area still face high unemployment rates. 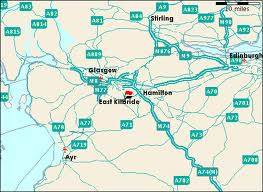 Unlike the people in Glasgow, people in Aberdeen have seen great growth and prosperity since the 1970's. This growth is mostly due to the opening of offshore oil and gas fields under the North Sea. The fields provide many jobs and bring much money to the area. They have made Aberdeen the oil capital of Europe.

Rural Life. Less than one-fourth of Scotland's people live in rural areas. Much of Scotland's countryside has rugged terrain and offers only a limited number of jobs and resources. Some rural workers fish, grow crops, raise livestock, or harvest timber. However, only about 2 percent of Scotland's employed people earn their living in farming, fishing, and forestry. As a result, many rural dwellers work in the cities.

The distinction between urban and rural communities in Scotland is often blurred. As a result of better transportation and greater contact with the cities, rural communities have become less distinctive and their people less close-knit. As in the cities, housing in rural areas greatly improved during the late 1900's. Fewer rural people live in apartments, but otherwise housing and social conditions in urban and rural areas are similar.

Food and Drink. Favorite foods and beverages in Scotland increasingly resemble those in other parts of the United Kingdom. Most Scottish cooking is simple. Favorite traditional Scottish dishes include fish and chips, herring, roast beef, and roast lamb. The Scots also enjoy fine steaks from Scotland's famous Aberdeen-Angus cattle.

Other traditional Scottish foods include haggis, kippers, oatmeal, and salmon. Haggis is a famous national dish made from the heart, liver, and lungs of a sheep. These ingredients are chopped with suet (animal fat), onions, oatmeal, and seasonings, and then boiled in a bag made from a sheep's stomach. Kippers are smoked herring, a favorite breakfast dish. Oatmeal is used in many Scottish dishes, including porridge and oatcakes (flat cakes cooked on a griddle), both of which are popular for breakfast. Salmon is served smoked, grilled, or poached. Salmon taken from Scottish waters is considered one of the world's tastiest fishes.

In addition to traditional Scottish foods, other foods such as hamburgers, pizzas, and curries (stews spiced with curry) are popular in Scotland. Tea is also popular. The number of Scots who drink coffee has increased greatly since the mid-1900's.

One of the favorite alcoholic drinks in Scotland is Scotch whisky, or Scotch. The Scots have been making whisky since the 1400's. They export about 85 million gallons (322 million liters) of Scotch yearly.

The Scots probably developed the modern game of golf, and it is still one of their favorite games. Scotland's numerous golf courses include the world-famous Royal and Ancient Golf Club of St. Andrews.

The Highland Games, which resemble track meets, are held throughout the Highlands during the spring, summer, and early fall. Field events include tossing the caber, a long wooden pole that weighs about 180 pounds (82 kilograms). Athletes compete to see who can heave the caber the straightest. Other events of the Highland Games include footraces and dancing and bagpipe competitions. The British royal family traditionally attends the games held in Braemar.

People from throughout the world come to fish for trout and salmon in the clear mountain streams of the Highlands. Hiking, mountain climbing, and shooting are also popular in the Highlands. The area around Ben Nevis in western Scotland is one of the best mountain-climbing regions in Europe.

Popular winter sports in Scotland include skiing and curling. Curling is a game in which the players slide heavy stones across a sheet of ice toward a target

The Arts. Scotland has produced many famous artists, especially in the field of literature. The earliest Scottish literature was chiefly oral. It was sung or chanted by poet-singers called bards, who composed poetry and songs in the Gaelic language. Between the 1300's and 1700's, famous Scottish poets included John Barbour, Gavin Douglas, William Dunbar, and Allan Ramsay. Robert Burns, who wrote in the late 1700's, became the national poet of Scotland. He wrote many works in Scots, the literary Scottish dialect. Many modern Scottish poets, including Hugh McDiarmid, Tom Scott, and Douglas Young, also have used Scots.

Most Scottish prose is written in English. Famous Scottish authors of the 1700's include James Boswell, who wrote a fascinating biography of the English writer Samuel Johnson, and John Arbuthnot, who wrote many great essays. In the 1800's, Thomas Carlyle produced brilliant histories and biographies, and John Lockhart became known for his works of literary criticism. Scotland's best-known novelists, Sir Walter Scott and Robert Louis Stevenson, also wrote during the 1800's. Scott's most famous work is Ivanhoe (1819). Stevenson's novels include Treasure Island (1883) and Kidnapped (1886). The Scottish writer Sir James Barrie wrote Peter Pan (1904) and other popular plays.

Scotland's first important painters were the portrait painters Allan Ramsay (the son of the poet) and Sir Henry Raeburn, who lived in the 1700's and early 1800's. Other famous painters since then include Sir James Guthrie, W. Y. Macgregor, William MacTaggart, Sir William Orchardson, John Pettie, and Sir David Wilkie.

Scottish music has traditionally centered on the bagpipe. The Scots divide bagpipe music into big music and little music. Big music includes warlike or sad songs called pibrochs. Little music includes marches and music for dancing. The Scottish reel, the Highland fling, the sword dance, and other traditional dances are performed to little music. The Edinburgh International Festival of the Arts, held in Edinburgh each August, features musical and dramatic productions.