For many years, antiserum extracted from human or animal blood was the main source of antibodies for tests and therapy, but most antiserum has a basic problem. It contains polyclonal antibodies,meaning that it is a mixture of different antibodies because it reflects dozens of immune reactions from a wide variety of B-cell clones. This characteristic is to be expected, because several immune reactions may be occurring simultaneously, and even a single species of microbe can stimulate several different types of antibodies. Certain applications in immunology require a pure preparation of monoclonal antibodies (MABs)that originate from a single clone and have a single specificity for antigen.

The technology for producing monoclonal antibodies is possible by hybridizing cancer cells and plasma cells in vitro (figure 4). This technique began with the discovery that tumors isolated from multiple myelomas in mice consist of identical plasma cells. These monoclonal plasma cells secrete a strikingly pure form of antibodies with a single specificity and continue to divide indefinitely. Immunologists recognized the potential in these plasma cells and devised a hybridomaapproach to creating MABs. The basic idea behind this approach is to hybridize or fuse a myeloma cell with a normal plasma cell from a mouse spleen to create an immortal cell that secretes a supply of functional antibodies with a single specificity.

Laboratories use MABs to identify antigens, receptors, and antibodies; to differentiate cell types (T cells versus B cells) and cell subtypes (different sets of T cells); to diagnose diseases such as cancer and AIDS; and to identify bacteria and viruses.

A number of promising techniques have been directed toward using monoclonals as drugs. When genetic engineering is combined with hybridoma technology, the potential for producing antibodies of almost any desired specificity and makeup is possible. For instance, chimeric MABs (monoclonal antibodies) that are part human and part mouse have been produced through splicing antibody genes. It is even possible to design an antibody molecule that has antigen binding sites with different specificities. Monoclonals can be hybridized with plant or bacterial toxins to form immunotoxincomplexes that attach to a target cell and poison (Figure 5). The most exciting prospect of this therapy is that it can destroy a specified cancer cell and not harm normal cells. Monoclonals are currently employed in treatment of cancers such as breast and colon cancers. Drugs such as Rituxan and herceptin bind to cancer cells and trigger their death. Such antibodies could also be used to suppress allergies, autoimmunities, and graft rejection. Drugs such as OKT3 and Orthoclone are currently used to prevent the rejection of organ transplants by incapacitating cytotoxic T cells. Now that researchers have genetically engineered plants and mice to produce human MABs, therapeutic uses will continue to expand. MABs are undergoing clinical trials to treat heart, lung, and inflammatory diseases. 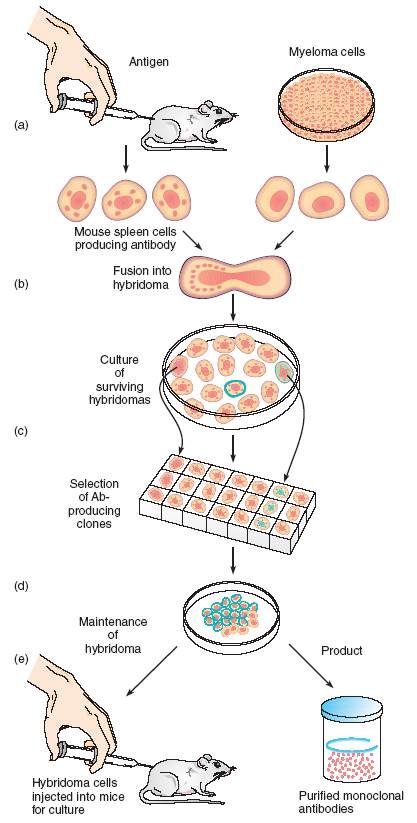