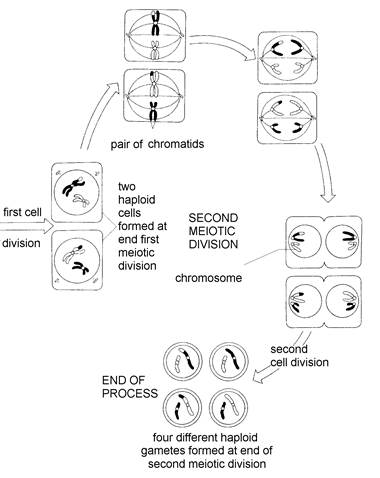 two sex cells unite, the new organism has the normal number of chromosomes for that species and the especial individual make-up.

Significance of meiosis: prior to the mixing of one individual’s genotype with that of another at fertilization, meiosis provides the opportunity for new combinations of the existing alleles of genes to arise as follows.

Crossing over takes place when breaks occur in chromatids at the beginning of meiosis, when the chromosomes are paired, and the broken end of each chromatid joins with the chromatid of an homologous chromosome. By this means, alleles of linked genes can become separated. This can result in the formation of new combinations of alleles and give four genetically different chromatids each of which ends up in a different gamete. This may lead to the formation of new phenotypes in the next generation.Alleles are exchanged between chromosomes.

The human Y chromosome is unusual in that it carries very few genes. The X chromosome, however, carries many genes. A trait controlled by genes on the sex chromosomes is called a sex-linked trait.