Meiosis (Fig. 2.5, 2.6) begins with an original parent cell that has 23 pairs of chromosomes. In the first division of meiosis, the DNA has already replicated forming two twin strands. The two twin stranded chromosomes come together in a pair. Often at this point some of the DNA of one chromosome break off and crosses over to another chromosome. Crossing over the DNA helps to explain the difference between parents and their young. The chromosomes then line up, separate, and move to opposite ends of the cell. Two new cells form.

In the second division, the chromosomes line up in the center of each cell. This time, the chromosomes don’t duplicate. The strands merely separate. Each strand moves to opposite sides of the cells and becomes a chromosome. The cells then divide. Four new cells are the sex cells. They have half the number of chromosomes as the original parent cells. When 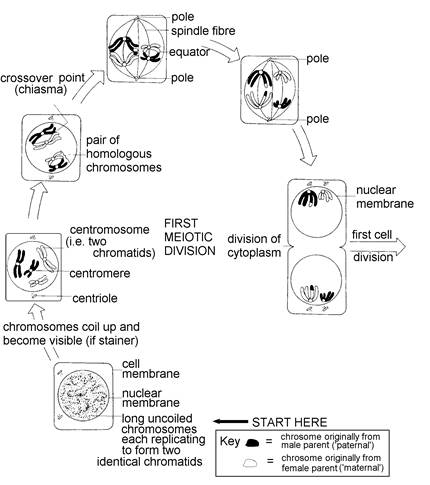