Weapons weren't the only possibilities open to nuclear scientists and engineers at the end of the 1930's. While nuclear fission chain reactions and thermonuclear fusion were clearly ways to unleash phenomenal destructive energy, they could also provide virtually limitless sources of useful energy. By controlling the same nuclear reactions that occur in nuclear weapons, people have since managed to extract nuclear eneTgy for constructive uses. In the half-century since their conception, nuclear fission reac­tors have developed into a fairly mature technology and have become one of our major sources of energy. Nuclear fusion power remains an elusive goal, but efforts continue to harness this form of nuclear energy as well.

Assembling a critical mass of uranium doesn't always cause a nuclear explosion. In feet, it's rather hard to cause a big explosion. The designers of the atomic bomb had to assemble not just a critical mass but a supercritical mass and they had to do it in much less than a millionth of a second. That's not something that happens easily or by ac­cident. It's much easier to reach a critical mass slowly, in which case the uranium wul simply become very hot. It may ultimately explode from overheating, but it will not vaporize everything in sight. 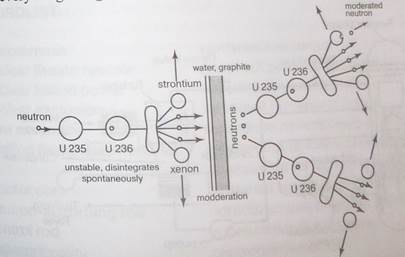 This slow assembly of a critical mass is the basis for nuclear fission reactors. Their principal product is heat, which is often used to generate electricity. Fission reactors are much simpler to build and operate than fission bombs because they don't require such purified fissionable materials. In fact, with the help of some clever tricks, nuclear reac­tors can even be made to operate with natural uranium.

Let's begin by showing that a fission chain reaction doesn't always lead to an ex­plosion. What's important is just how fast the fission rate increases. In an atomic bomb, it increases breathtakingly quickly. At detonation, the fissionable material is far above the critical mass so the average fission induces not just one, but perhaps two, subsequent fissions. With only about 10 ns (10 nanoseconds) between one fission and the two it in­duces, the fission rate may double every 10 ns. In less than a millionth of a second, most of the nuclei in the material undergo fission, releasing their energy before the material has time to blow apart.

But things aren't so dramatic right at critical mass, where the average fission in­duces just one subsequent fission. Since each generation of fissions simply reproduces itself, the fission rate remains essentially constant Only spontaneous fissions cause it to rise at all. The fissionable material steadily releases thermal energy and that energy can be used to power an electric generator. 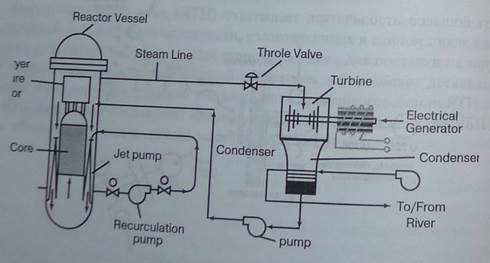 The car driving analogy illustrates another important point about reactors. Both cars and reactors respond relatively slowly to movements of their controls. It would be hard to drive a car that instantly stopped when you lifted your foot off the gas pedal and leaped to supersonic speed when you pushed your foot down. Similarly, it would be im­possible to operate a reactor that immediately shut down when you dropped the control rods in and instantly exploded when you pulled the control rods out.

To further ease the operation of modern nuclear reactors, they are designed to be stable and self-regulating. This self-regulation ensures that the core automatically be­comes sub critical if it overheats. As we'll see later on, this self-regulation was absent in the design of Chernobyl Reactor Number 4.