First, we identify four broad classes of reactions based solely on the struc­tural change occurring in the reactant molecules. This classification does not re­quire knowledge or speculation concerning reaction paths or mechanisms. The letter R in the following illustrations is widely used as a symbol for a generic group. It may stand for simple substituents such as H- or CH3-, or for complex groups com­posed of many atoms of carbon and other elements. 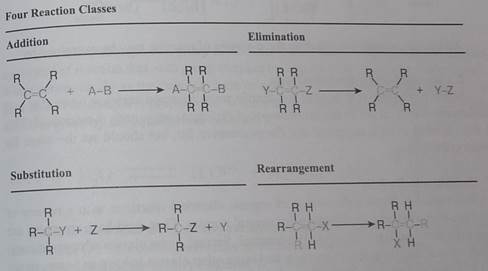 In an addition reaction the number of o-bonds in the substrate molecule increases, usually at the expense of one or more π-bonds. The reverse is true of elrniination reac­tions, i.e .the number of a-bonds in the substrate decreases, and new π-bonds are often formed. Substitution reactions, as the name implies, are characterized by replacement of an atom or group (Y) by another atom or group (Z). Aside from these groups, the number of bonds does not change. A rearrangement reaction generates an isomer, and again the number of bonds normally does not change.

The examples illustrated above involve simple alkyl and alkene systems, but these reaction types are general for most functional groups, including those incorporating carbon-oxygen double bonds and carbon-nitrogen double and triple bonds. Some com­mon reactions may actually be a combination of reaction types. The reaction of an ester with ammonia to give an amide, as shown below, appears to be a substitution reaction (Y = CH30 & Z = NHL); however, it is actually two reactions, an addition followed by an elimination.

The addition of water to a nitrite does not seem to fit any of the above reaction types, but it is simply a slow addition reaction followed by a rapid rearrangement, as shown in the following equation. Rapid rearrangements of this kind are called tautom-erizarions.

Additional examples illustrating these classes of reaction may be examined by