What is the Periodic Table of The Elements?

The periodic table is the most important chemistry reference there is. It arranges all the known elements in an informative array. Elements are arranged left to right and top to bottom in order of increasing atomic number. Order generally coincides with increasing atomic mass.

The different rows of elements are called periods. The period number of an ele­ment signifies the highest energy level an electron in that element occupies (in the unexcited state). The number of electrons in a period increases as one traverses down the periodic table; therefore, as the energy level of the atom increases, the number of energy sub-levels per energy level increases. 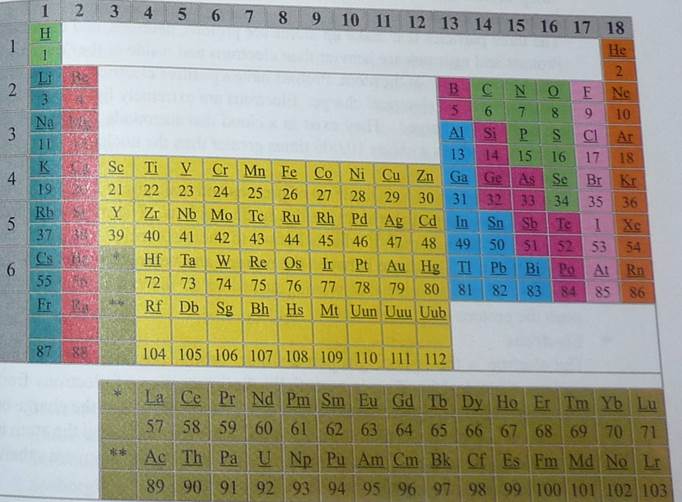 All macroscopic matter is made out of many toy particles called atoms. The study of how these atoms interact is called Chemistry.

The three particles that make up atoms are protons, neutrons, and electrons. Protons and neutrons are heavier than electrons and reside in the "nucleus," which is the center of the atom. Protons have a positive electrical charge, and neutrons have no electrical charge. Electrons are extremely lightweight and are negatively charged. They exist in a cloud that surrounds the atom. The electron cloud has a radius 10,000 times greater than the nucleus.

The nucleus of an atom is made up of protons and neutrons in a cluster. Vir­tually all the mass of the atom resides in the nucleus. The nucleus is held together by the tight pull of what is known to chemists and physicists as the "strong force." This force between the protons and neutrons overcomes the repulsive electrical force that would, according to the rules of electricity, push the protons apart otherwise.

The electron is the lightweight particle that "orbits" outside of the atomic nucleus. Chemical bonding is essentially the interaction of electrons from one atom with the electrons of another atom. The magnitude of the charge on an electron if equal to the charge on a proton. Electrons surround the atom in pathways called orbitals.. The inner orbitals surrounding the atom are spheri­cal but me outer ortttab are much more complicated.

Chemically bonding occurs when two particles can exchange or combine their outer electrons m such a way that is energetically favorable. An en­ergetically favorable state can be seen as analogous to the way a dropped rock has a natural tendency to fall to the floor. When two atoms are close to each other and their electrons are of the correct type, it is more energetically favorable for them to come together and share electrons (become "bonded") than it is for them to exist as individual, separate atoms. When the bond oc­curs, the atoms become a compound. Like the rock felling to the floor, they "fall" together naturally.

The 38 elements in groups 3 through 12 of the periodic table are called "transition metals". As with all metals, the transition elements are both ductile and malleable, and conduct electricity and heat. The interesting thing about transition metals is that their valence electrons, or the electrons they use to combine with other elements, are present in more than one shell. This is the reason why they often exhibit several common oxida­tion states. There are three noteworthy elements in the transition metals family. These elements are iron, cobalt, and nickel, and they are the only elements known to produce a magnetic field.

The Transition Metals are:

The six noble gases are found in group 8 of the Periodic Table. These elements

0 prevents the noble gases from forming compounds readily. All noble gaseshave the maximum number of electrons possible in their outer shell (2for Helium, 8 for all others) making them stable.

The 7 elements classified as other metals are located in group 13, 14 and 15, while these elements are ductile and malleable they are not the same as the transition ele­ments These elements, unlike their transition elements, do not exhibit variable oxida­tion states, and their valence electrons are only present in their outer shell. All of these elements are solid, have a relatively high density, and are opaque. They have oxidation numbers of +3, +/- 4 and -3. They are: