Table 1. The Main differences between Molecularity and Order of Reaction

b) Physical size of the reactants: Among the solids, rate increases with decrease in particle size of the solid.

c) Chemical nature of the reactants:

· Reactions involving polar and ionic substances including the proton transfer reactions are usually very fast. On the other hand, the reaction in which bonds is rearranged, or electrons transferred are slow.

· Oxidation-reduction reactions, which involve transfer of electrons, are also slow as compared to the ionic substance.

· Substitution reactions are relatively much slower.

Temperature coefficient (j) of a reaction is defined as the ratio of rate constants at two temperatures differing by 10°C:

Arrhenius proposed a quantitative relationship between rate constant and temperature as,

The equation is called Arrhenius equation. In which constant A is known as frequency factor. This factor is related to number of binary molecular collision per second per litre; Ea is the activation energy; T is the absolute temperature and R is the gas constant. Both A and Ea are collectively known as Arrhenius parameters.

The value of activation energy (Ea) increases, the value of k decreases and therefore, the reaction rate decreases.

The physical meaning of the activation energy (Ea) is that it is the minimum relative kinetic energy which the reactant molecules must possess for changing into the products molecules during their collision. This means that the fraction of successful collision is equal to

The Arrhenius equation can be written in a non-exponential form, which is often more convenient to use and to interpret graphically. Taking the natural logarithms of both sides and separating the exponential and pre-exponential terms yields: ln(k) = ln(A)−EaRT

Note that this equation is of the form y = mx + b, and creating a plot of ln(k) versus 1/T will produce a straight line with the slope –Ea /R. 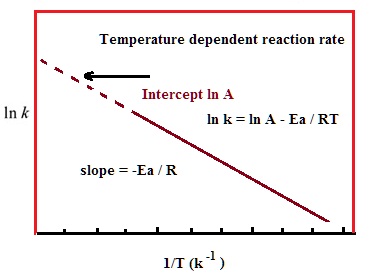 This affords a simple way of determining the activation energy from values of k observed at different temperatures. We can plot ln(k) versus 1/T,and simply determine the slope to solve for Ea.

The activation energy can also be calculated algebraically if k is known at two different temperatures:

We can subtract one of these equations from the other:

This equation can then be further simplified to:

3) Concentration of reactants: In 1864,Peter Waage and Cato Guldberg pioneered the development of chemical kinetics by formulating the law of mass action, which states that the speed of a chemical reaction is proportional to the quantity of the reacting substances. 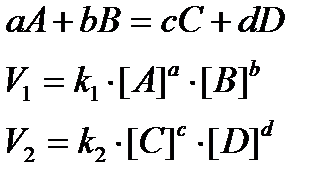 where k is called rate constant or velocity constant.

• The value of rate constant depends on, nature of reactant, temperature and catalyst. It is independent of concentration of the reactants.

Where n order of reaction.

Catalyst are generally foreign substances but sometimes one of the product formed may act as a catalyst and such catalyst is called “auto catalyst” and the phenomenon is called auto catalysis.

The radiant energy initiates the chemical reaction by supplying the necessary activation energy required for the reaction.