The United Kingdom within the framework of a constitutional monarchy, in which the Monarch is the head of state and the Prime Minister of the United Kingdom is the head of government. Executive power is exercised by Her Majesty's Government, on behalf of and by the consent of the Monarch, as well as by the devolved Governments of Scotland and Wales, and the Northern Ireland Executive. Legislative power is vested in the two chambers of the Parliament of the United Kingdom, the House of Commons and the House of Lords, as well as in the Scottish parliament and Welsh and Northern Ireland assemblies. The judiciary is independent of the executive and the legislature. The highest national court is the Supreme Court of the United Kingdom.

The UK political system is a multi-party system. Since the 1920s, the two largest political parties have been the Conservative Party and the Labour Party. The House of Commons is the lower house of the Parliament of the United Kingdom which, like the House of Lords (the upper house), meets in the Palace of Westminster. 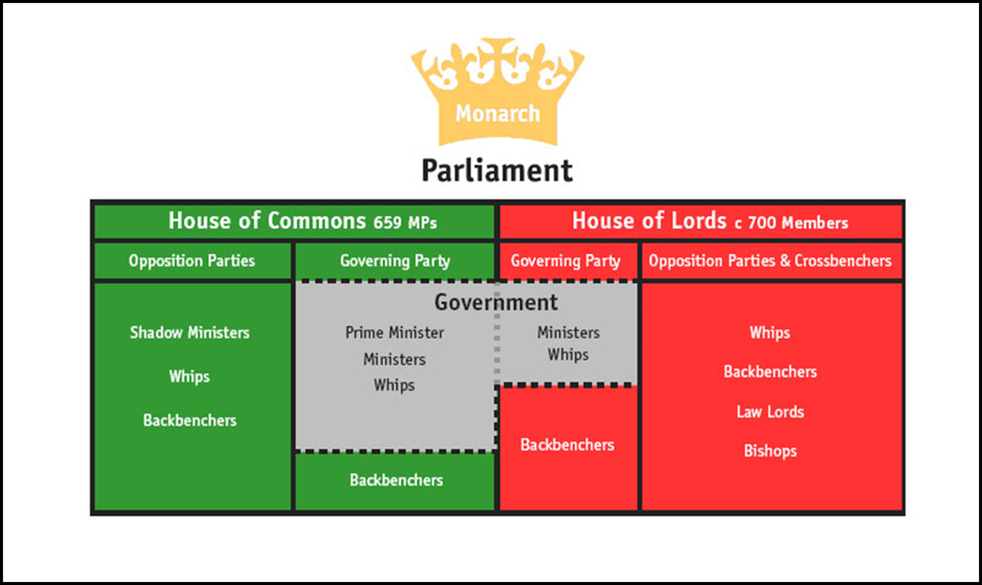 About 25% of Britain's land is arable, and almost half is suitable for meadows and pastures. Its agriculture is highly mechanized and extremely productive; about 2% of the labor force produces 60% percent of the country's food needs. Barley, wheat, rapeseed, potatoes, sugar beets, fruits, and vegetables are the main crops. The widespread dairy industry produces milk, eggs, and cheese. Beef cattle and large numbers of sheep, as well as poultry and pigs, are raised throughout much of the country. There is also a sizable fishing industry, with cod, haddock, mackerel, whiting, trout, salmon, and shellfish making up the bulk of the catch.

Great Britain is one of the world's leading industrialized nations. It has achieved this position despite the lack of most raw materials needed for industry. It must also import 40% of its food supplies. Thus, its prosperity has been dependent upon the export of manufactured goods in exchange for raw materials and foodstuffs. Within the manufacturing sector, the largest industries include machine tools; electric power, automation, and railroad equipment; ships; aircraft; motor vehicles and parts; electronic and communications equipment; metals; chemicals; coal; petroleum; paper and printing; food processing; textiles; and clothing.

London is Europe's foremost financial city. Metal goods, vehicles, aircraft, synthetic fibers, and electronic equipment are made in the West Midlands. Greater Manchester has cotton and synthetic textiles, coal, and chemical industries and is a transportation and warehousing center.

The South Wales conurbation, with the ports of Swansea, Cardiff, and Newport, was historically a center of coal mining and steel manufacturing; coal mining has declined sharply, however, in many parts of the region. Current important industries also include oil refining, metals production (lead, zinc, nickel, aluminum), synthetic fibers, and electronics. In Scotland, the region around the River Clyde, including Glasgow, is noted for shipbuilding, marine engineering, and printing as well as textile, food, and chemicals production. The Belfast area in Northern Ireland is a shipbuilding, textile, and food products center.

Great Britain has abundant supplies of coal, oil, and natural gas. Production of oil from offshore wells in the North Sea began in 1975, and the country is self-sufficient in petroleum. Other mineral resources include iron ore, tin, limestone, salt, china clay, oil shale, gypsum, and lead.

The country's chief exports are manufactured goods, fuels, chemicals, food and beverages, and tobacco. The chief imports are manufactured goods, machinery, fuels, and foodstuffs. Since the early 1970s, Great Britain's trade focus has shifted from the United States to the European Union, which now accounts for over 50% of its trade. The United States, Germany, France, and the Netherlands are the main trading partners, and the Commonwealth countries are also important.