1. Translate the following words and memorize them:

2. Read the text carefully and do the tasks that follow:

Roads at the turn of the 20th century were largely inadequate for the demands about to be placed on them by the automobile and bicycle. As vehicle speeds increased rapidly, the available friction between road and tyre became critical for accelerating, braking and cornering. In addition, numerous pavement failures made it obvious that much stronger and tougher materials were required. The result was an ongoing search for a better pavement. Asphalt and concrete both offered promise.

Asphalt is a mixture of bitumen and stone, and concrete is a mixture of cement and stone. The first road use of asphalt occurred in 1824 when asphalt blocks were placed on the Champs-Elysees in Paris. The first successful concrete pavement was built in Inverness, Scotland, in 1865. Both asphalt and concrete required the availability of powerful stone-crushing, mixing and spreading equipment.

The impetus for the development of modern road asphalt came from the United States which had few deposits of natural bitumen to draw upon and where engineers were therefore forced to study the behaviour of this material. The first steps came in the 1860s with the work of Belgian immigrant Edward de Smedt at Columbia University in New York. De Smedt conducted his first tests in New Jersey in 1870 and by 1872 was producing the equivalent of modern road asphalt. The first applications were in Battery Park and on Fifth Avenue in New York City in 1872.

In 1887 de Smedt was followed as inspector of asphalts and cements by Clifford Richardson. Richardson basically developed two forms of asphalt: asphaltic concrete, which was strong and stiff and thus provided structural strength; and hot-rolled asphalt, which contained more bitumen and thus produced a far smoother and better surface for the car and bicycle. 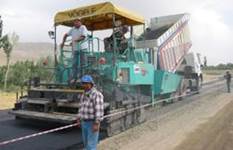 Richardson published a standard textbook on asphalt paving in 1905, and the practice did not change greatly thereafter. The biggest change was in the machinery available to produce, place and finish the material rather than in the product itself. Toward the end of the century, there were major movements towards the use of recycled asphalt, chemical modifiers for improving bitumen properties and small fibres for improving crack resistance.

building was largely, fed from a dump truck

developed by the turn of the 20th century and was restricted more by the available machinery then by the material. For the following century the two materials remained in intense competition, both offering a similar product at a similar cost, and there was little evidence that one would far ahead of the other as they continued on their paths of gradual improvement.