Decide whether these statements are true or false? Correct the wrong ones.

THE HISTORY OF ROADS AND HIGHWAYS

Before you read the text, look at the words in the box and tick the ones you know. Consult the others in the dictionary.

3. Read the text carefully and do the tasks that follow:

Road is a strip of land that provides routes for travel by automobiles and other wheeled vehicles. Roads usually connect urban areas with each other and rural areas with urban areas.

Roads and highways are vital lifelines. Farmers use them to ship their products to markets. Trucks can carry manufactured products from one area to another. Good roads carry millions of automobiles that travel on business and for pleasure.

Roads are so old that we are not sure of the origin of the word “road”. Most experts think it came from the Middle English word “rode” meaning “a mounted journey”. This may have come from the Old English “rad”, from the word “ridan”, meaning “to ride”.

In England, hundreds of years ago, certain main roads were higher than the surrounding ground. This was because earth was thrown from the side ditches towards the center. Because they were higher they were called highways. These roads were under protection of the king’s men and were opened to all travelers.

Early roads were built in the Near East soon after the wheel was invented. This was about 3000 B.C. As trade developed between villages, towns and cities, other paths or trade routes were made. One such early system of roads was the Old Silk Trade Route which ran over 6,000 miles (9,700 kilometers), connecting China with Rome and Europe. Merchants used this ancient route to carry Chinese silk across Turkistan, India and Persia.

The Egyptians, Carthaginians and Etruscans all built roads. But the first really great road builders were the Romans. They knew how to lay a solid base and how to make a pavement of flat stones. The Romans knew that the road must slope slightly from the center toward both sides to drain off water. The Roman road builders knew also that there must be ditches along the sides of the road to carry water away. Roman roads were built mainly to get soldiers from one part of the Empire to another. These roads ran inA cobblestone Roman

almost straight lines and passed over hills road in Pompeii

instead of cutting around them. The Romans built more than 50,000 miles (80,000 kilometers) of roads in there Empire and some of them are still in use.

From the 500’s to the 1800’s most roads in Europe were merely clearings in the forests. Cobblestone paving was used in some urban areas. There was little reason to built good roads, because most of the travel was on the horseback. The cleared way was sometimes quite wide so that robbers hiding in the woods could not leap out suddenly upon unsuspecting travelers. Later, when more wheeled vehicles, such as wagons, came into use, the roads of Europe still remained in poor condition.

1. What does this text deal with?

2. What do roads and highways serve for?

3. Did people use the paths made by animals in ancient times?

4. What really accelerated the building of good roads?

5. What was the most famous trade route?

6. Why do we consider the Romans the great road builders?

7. What purpose were Roman roads built for?

8. Asphalt paving was used in some urban areas, wasn’t it?

5. Fill in the correct word from the box:

Roadmaking originated in the period of early human settlements. People chose the most convenient and the shortest ________of approach to their ________and fishing grounds, making footpaths. The first artificially constructed tracks were made in mountainous and forested _______.

6. Give the English equivalents to the Russian words:

1. Early roads were built in the Near East after the (изобретения) of the (колеса). 2. The Romans knew that the road (должна слегка наклоняться) from the centre towards both sides. 3. The centre of the highways was higher than (окружающая земля, чтобы отводить воду) from the surface. 4. The road pavement was made of (плоских камней) with (прочным основанием). 5. The Roman roads were (прямые) with (канавами вдоль сторон дороги).

7. Match the words with their synonyms:

a) to ship, car, to manufacture, trip, main, to connect, path, towards

b) journey, to produce, vehicle, to carry, to, chief, way, to join

8. Match the words with their antonyms:

9. Form the verbs from the following nouns and translate them:

10. Form the adverbs from the following adjectives and translate them:

a)the appearance of the first roads in the world;

1. Before you read the text, check the meaning of these words. Use a dictionary if necessary.

4. to support the load d) усовершенствование

3. Read the text carefully and do the tasks that follow:

Up to this time roads similar to the Roman roads were built. However, owing to a scarcity of a suitable material and the high cost of labour, the amount of stone material used was progressively reduced and the work was carried out less thoroughly. Research was carried out to find out more rational methods of using stone for pavement construction which would reduce both the amount of labour and the cost. And in the last half of the 18-th century the farthers of modern road building and road maintenance appeared in France and Britain.

Tresaquet. In France in 1764, Pierre Tresaquet, became an engineer of bridges and roads in Limoges. He developed an entirely new type of relatively light road surface, based on theory that the underlying natural formation should support the load.

His standard cross-section, 18 feet wide, consisted of an eight-inch-thick course of uniform stones laid edgewise on the natural formation and covered by a two-inch layer of broken stone. The second layer was topped with one-inch layer of smaller broken stone. In order to maintain surface level Tresaquest's pavement was placed in an excavated trench — a technique that made drainage a difficult problem. 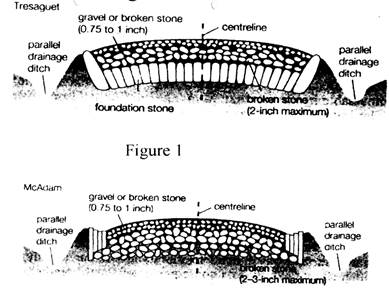 McAdam. The greatest advance came from John McAdam, born in 1756 in Scotland. He reached major heights in his road-building career after 1804 when he was appointed general surveyor for Bristol. The roads leading to Bristol were in poor condition. There he showed that traffic could be supported by a relatively thin layer of small, single-sized pieces of broken stone placed and compacted on a well-drained natural formation and covered by an impermeable surface of smaller stones.

Mc Adam is famous for the surface he developed for roads. This kind of surface, called macadam, is still used today. Mc Adam also stressed the importance of proper drainage to keep roads on a solid foundation. Drainage was essential to the success of Mc Adam’s method and he required the pavement to be elevated above the surrounding surface. The structural layer of broken stone was eight inches thick and used stone of two or three inches maximum size laid in layers and compacted by traffic. The top layer was 2 inches thick, using three-quarter-inch stone to fill surface voids between the large stones. Continuous maintenance was essential.

Russian engineers were the first ones to construct granular surfacing laid on sand base which are now widely used in other countries. The use of a sand base permitted the cost of construction to be reduced and the removal of water from the subgrade to be facilitated. It helped to increase subgrade stability.

1. When did a period of intensive road-building begin in Europe?

2. Why was there a great demand for better roads?

3. What problems did the first engineers try to solve?

4. When did the fathers of modern road building appear?

5. What was the main idea of Tresaquet’s method of road pavement construction?

6. What kind of surface did Mc Adam suggest?

7. What was essential in road pavement construction in Mc Adam’s opinion?

8. What method of road pavement construction was proposed by Russian engineers?

Decide whether these statements are true or false? Correct the wrong ones.

1. Rural roads in the 17-th and 18-th centuries were passable in rainy weather.

2. There was enough suitable material to use for pavement construction.

3. Research was carried out to look for more rational methods of using stone for pavement construction.

5. Tresaquet’s pavement was elevated above the surrounding surface.

7. The advantage of McAdam’s method was that he placed the pavement in an excavated trench and provided proper drainage.

8. Granular surfacing laid on sand base which is now widely used in other countries was constructed by Russian engineers.

6. Match the following words with their synonyms.

7. Match the following words with their antonyms.

8. State the part of speech of the following words and translate them:

9. Form the nouns from the following verbs using suffixes “-er”, “-or” and translate them into Russian:

to make, to travel, to use, to design, to survey, to excavate, to manage, to govern, to investigate, to mix, to vibrate, to transport, to compact.

10. Give Russian equivalents to the following words:

o b) the greatest advance of McAdam