WHAT IS A REFINERY? 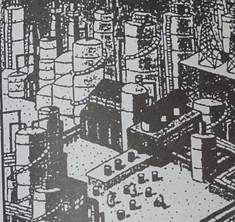 A refinery is a factory. Just as a paper mill turns lumber into legal pads or a glassworks turns silica into stemware, a refinery takes a raw ma­terial-crude oil-and transforms it into gasoline and hundreds of other useful products. Inside a maze of sil­ver towers and pipes is a fascinating factory that changes hydrocarbon molecules to make gasoline.

A typical large refinery costs billions of dollars to build and mil­lions more to maintain and upgrade. It runs around the clock 365 days a year, employs between 1,000 and 2,000 people and occupies as much land as several hundred football fields. It's so big and sprawling, in fact, that workers ride bicycles from one station to another.

Chevron has five gasoline-producing "Factories" in the United States and another in Burnaby, British Columbia. Chevron Texaco has refining capacities worldwide of over two million barrels per day.

These world class operations had surprisingly humble origins. In 1876, company pioneers used wagons and mules to haul two primitive stills to a spot near Pico Canyon, Calif., the site of California's first producing oil wells. The stills, each about the size of a garage, were used to heat oil at the prodigious rate of 25 to 40 barrels a day. This "oil boiling" produced kerosene, lubricants, waxes and gasoline--a clear, lightweight liquid that generally was discarded as a useless byproduct Gasoline's lowly status rose quickly after 1892, when Charles Duryea built the first U.S. gas-powered automobile. From then on, the light stuff from crude oil became the right stuff.

Today, some refineries can turn more man half of every 42-gallon barrel of crude oil into gasoline. That's a remarkable technological improvement from 70 years ago, when only 11 gallons of gasoline could be produced. How does this transformation take place? Essentially refining breaks crude oil down into its various components, which then are selectively reconfigured into new products.

This process takes place inside a maze of hardware that one observer has likened to "a metal spaghetti factory." Employees regulate refinery operations from within highly automated control rooms. Because so much activity happens out of sight, refineries are surprisingly quiet places. The only sound most visitors hear is the constant, low hum of heavy equipment

The complexity of this equipment varies from one refinery to the next. In general the more sophisticated a refinery, the better its ability to upgrade crude oil into high-value products. Whether simple or complex, however, all refineries perform three basic steps: separation, conversion and treatment.

Separation: heavy on thebottom, light on the top

Modern separation - which is not terribly different from the "cooking" methods used at the Pico Canyon stills - involves piping oil through hot furnaces. The resulting liquids and vapors are discharged into distillation towers, the tall, narrow columns that give refineries their distinctive skylines.

Inside the towers, the liquids and vapors separate into components or fractions ac­cording to weight and boiling point. The lightest fractions, including gasoline and liquid petroleum gas (LPG), vaporize and rise to the top of the tower, where they condense back to liquids. Medium weight liquids, including kerosene and diesel oil distillates, stay in the middle. Heavier liquids, called gas oils, separate lower down, while the heaviest fractions with the highest boiling points settle at the bottom. These tarlike frac­tions, called residuum, are literally the "bottom of the barrel."

The fractions now are ready for piping to the next station or plant within the refin­ery. Some components require relatively little additional processing to become asphalt base or jet fuel. However, most molecules that are destined to become high-value prod­ucts require much more processing.