Receiving an AM Signal

Here's a real world example. When you tune your car's AM radio to a station — for exempal, 680 on the AM dial — the transmitter's sine wave is transmitting at 680,000 hertz (the sine wave repeats 680,000 times per second). The DJ's voice is modulated that carrier wave by varying the amplitude of the transmitter's sine wave. An ampliefier amplifies the signal to something like 50,000 watts for a large AM station. The antenna sends the radio waves out into space.

So how does your car's AM radio — a receiver—receive the 680,000-hertz signal that IS sent and extract the information (the DJ's voice) from it? Here are the steps: 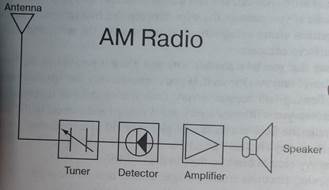 · Unless you are sitting right beside the transmitter, your radio receiver needs an antenna to help it pick the transmitter's radio waves out of the air. An AM antenna is simply a wire or a metal stick that increases the amount of metal (he transmitter's waves can interact with.

· Tuners work using a principle called resonance. That is, tuners resonate at, and amplify, one particular frequency and ignore all the other frequencies in the air. It is easy to create a resonator with a capacitor and an inductor.

· The tuner causes the radio to receive just one sine wave frequency (in this case, 680,000 hertz). Now the radio has to extract the DJ's voice out of that sine wave. This is done with a part of the radio called a detector or demodu­lator. In the case of an AM radio, the detector is made with an electronic component called a diode. A diode allows current to flow through in one direction but not the other, so it clips off one side of the wave, like this:

· The radio next amplifies the clipped signal and sends it to the speakers (or a headphone). The amplifier is made of one or mote transistors (more transisters means more amplification and therefore more power to the speakers).

· In an FM radio, the detector is different, but everything else is the same. In FM, the detector turns the changes in frequency into sound, but the antenna, tuner and amplifier are largely the same.