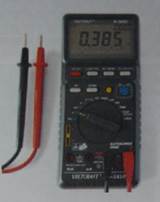 A multimeter is an electronic measuring in-that combines several functions in one unit. The most basic instruments include an ammeter, voltmeter, and ohmmeter.

fultimeter can be a handheld device useful for basic fault finding and field serviceor a bench instrument which can measure to seven or eight and a half digits of accurancy. Such an instrument will commonly be found in a calibration lab and can be used to characterise resistance and voltage standards or adjust and verify the performance of multi-function calibrators.

A multimeter may be implemented with an analog meter deflected by an electro-magnet, as a classic galvanometer; or with a digital display such as an LCD or Vacuum fluorescent display.

Analog multimeters are not hard to find in the used market, but are not very accu­rate because of errors introduced in zeroing and reading the analog meter face.

Analog meters may be implemented with vacuum tubes to precondition and am­plify the input signal. Such meters are known as vacuum tube volt meters (VTVM) or vacuum tube multimeters (VTMM).

Modern multimeters are exclusively digital, and identified by the term DMM digital multimeter. In such an instrument, the signal under test is converted to a digital voltage and an amplifier with an electronically controlled gain preconditions the signal Since the digital display directly indicates a quantity as a number, there is no risk of parallax causing an error when viewing a reading.

Similarly, better circuitry and electronics have improved meter accuracy. Older an­alog meters might have basic accuracies of five to ten percent. Modern portable DMMs may have accuracies as good as ±0.025%, and bench-top instruments have accuracies

in the single-digit parts per million figures.

Digital meters often feature circuitry or software to accurately measure AC voltages at any frequency. These meters integrate the input signal using the root mean square method, and will correctly read the true voltage of an input signal even if it isn't a perfect sine wave.

Modem meters may be interfaced with a personal computer by IrDA links, RS-232 connections, or an instrument bus such as IEEE-488. The interface allows the computer to record measurements as they are made or for the instrument to upload a series of results to the computer.

As modern appliances and systems become more complicated, the multimeter is| becoming less common in the technician's toolkit. More complicated and specialized equipment replaces it. Where a service man might have used an ohmmeter to measure resistance while testing an antenna, a modern technician may use a hand-held analyzer to test several parameters in order to determine the integrity of a network cable