А major beneﬁt of the space age has been the ability to look back from space and view our planet in its entirety. Every astronaut has remarked in one way or another on how Earth stands out as an inviting oasis in the otherwise black void of space (see the chapter opening photo). We are able to see not only the beauty of our planet but also its fragility. We can also decipher Earth’s long and frequently turbulent history by reading the clues preserved in the geologic record.

A major theme of this book is that Earth is a complex, dynamic planet that has changed continuously since its origin some 4.6 billion years ago. These changes and the present-day features we observe result from the interactions among Earth’s internal and external systems, subsystems, and cycles. Earth is unique among the planets of our solar system in that it supports life and has oceans of water, a hospitable atmosphere, and a variety of climates. It is ideally suited for life as we know it because of a combination of factors, including its distance from the Sun and the evolution of its interior, crust, oceans, and atmosphere. Life processes have, over time, inﬂuenced the evolution of Earth’s atmosphere, oceans, and to some extent its crust. In turn, these physical changes have affected the evolution of life.


By viewing Earth as a whole—that is, thinking of it as a system—we not only see how its various components are inter- connected but also better appreciate its complex and dynamic nature. The system concept makes it easier for us to study a complex subject such as Earth because it divides the whole into smaller components we can easily understand, without losing sight of how the components all ﬁt together as a whole.

A system is a combination of related parts that interact in an organized fashion (■ Figure 1.1). Information, materials, and energy that enter the system from the outside are inputs, whereas information, materials, and energy that leave the sys- tem are outputs. An automobile is a good example of a system. Its various subsystems include the engine, transmission, steering, and brakes. These subsystems are interconnected in such a way that a change in any one of them affects the others. The main input into the automobile system is gasoline, and its out- puts are movement, heat, and pollutants.

We can examine Earth in the same way we view an automobile—that is, as a system of interconnected components that interact and affect each other in many ways. The principal subsystems of Earth are the atmosphere, biosphere, hydrosphere, lithosphere, mantle, and core (■ Figure 1.2). The complex interactions among these subsystems result in a dynamically changing body that exchanges matter and energy and recycles them into different forms (Table 1.1). The rock cycle is an excellent example of how the interaction between Earth’s internal and external processes recycles Earth materials to form the three major rock groups (see Figure 1.12). Likewise, the movement of plates profoundly affects the formation of landscapes, the distribution of mineral resources, and atmospheric and oceanic circulation patterns, which in turn affect global climate changes.

We must also not forget that humans are part of the Earth system; our presence alone affects this system to some extent. Accordingly, we must understand that actions we take can produce changes with wide-ranging consequences that we might not initially be aware of. For this reason, an understanding of geology, and science in general, is of para- mount importance. If the human species is to survive, we must understand how the various Earth systems work and interact and, more important, how our actions affect the delicate balance between these systems. When people discuss and debate such environmental issues as acid rain, the greenhouse effect and global warming, and the depleted ozone layer, it is important to remember that these effects are not isolated but part of the larger Earth system. Furthermore, remember that Earth goes through time cycles that are much longer than humans are used to. Although they may have disastrous short-term effects on the human species, global warming and cooling are also part of a longer-term cycle that has resulted in many glacial advances and retreats during the past 1.6 million years. Because of their geologic perspective, geologists can make vital contributions to the debate on global warming. They can study long-term trends by analyzing deep-sea sediments, ice cores, changes in sea level during the geologic past, and the distribution of plants and animals through time. As you read this book, keep in mind that the different topics you study are parts of a system of interconnected components and not isolated pieces of information. Examined in this manner, the continuous evolution of Earth and its life is not a series of isolated and unrelated events, but a dynamic interaction among it various subsystems. 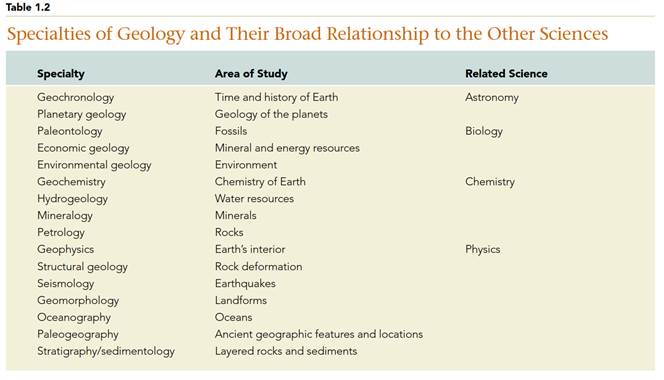 The discipline of geology is so broad that it is subdivided into many ﬁelds or specialties. Table 1.2 shows many of the diverse ﬁelds of geology and their relationship to the sciences of astronomy, biology, chemistry, and physics.

Nearly every aspect of geology has some economic or environmental relevance. Many geologists are involved in exploration for mineral and energy resources, using their specialized knowledge to locate the natural resources on which our industrialized society is based. As the demand for these nonrenewable resources increases, geologists apply the basic principles of geology in increasingly sophisticated ways to focus their attention on areas that have a high potential for economic success.

Whereas some geologists work on locating mineral and energy resources, an extremely important role, other geologists use their expertise to help solve environmental problems. Some geologists ﬁnd groundwater for the ever-burgeoning needs of communities and industries or monitor surface and underground water pollution and suggest ways to clean it up. Geologic engineers help ﬁnd safe locations for dams, waste-disposal sites, and power plants, and design earthquake-resistant buildings.

Geologists also make short- and long-range predictions about earthquakes and volcanic eruptions and the potential destruction that may result. In addition, they work with civil defense planners to draw up contingency plans should such natural disasters occur.

As this brief survey illustrates, geologists pursue a wide variety of careers and roles. As the world’s population increases and makes greater demands on Earth’s limited resources, we will depend even more on geologists and their expertise.