PARTS OF THE HUMAN BODY. 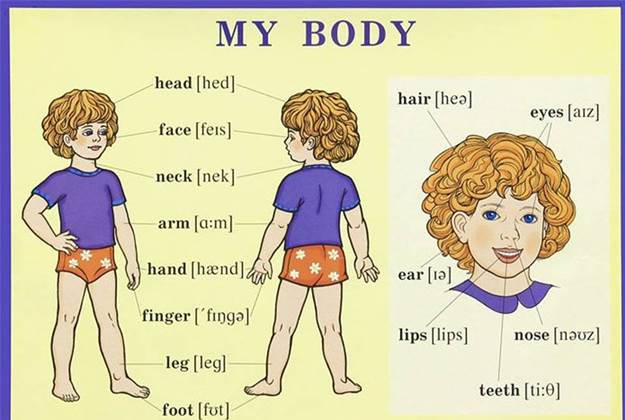 The head consists of two parts: the skull which contains the brain, and the face which consists of the forehead, the eyes, the nose, the mouth with the lips, the cheeks, the ears, and the chin.

The ear includes three principal parts: the external ear, the middle ear, and the internal ear.

The mouth has two lips: an upper lip and a lower lip. In the mouth there are gums with teeth, a tongue and a palate.

The head is connected with the trunk by the neck. The upper part of the trunk is the chest and the lower part is the abdomen.

The framework of bones called the skeleton supports the soft parts and protects the organs from injury. The bones are covered with muscles.

The upper extremity is connected with the chest by the shoulder. Each arm consists of the upper arm, the forearm, the elbow, the wrist, and the hand. We have five fingers on each hand: a thumb, an index finger, a middle finger, a ring finger, and a little finger.

The lower extremity (the leg) consists of the hip (the thigh), the knee, the calf, the ankle, and the foot. The fingers of feet are called toes.

The body is covered with the skin. 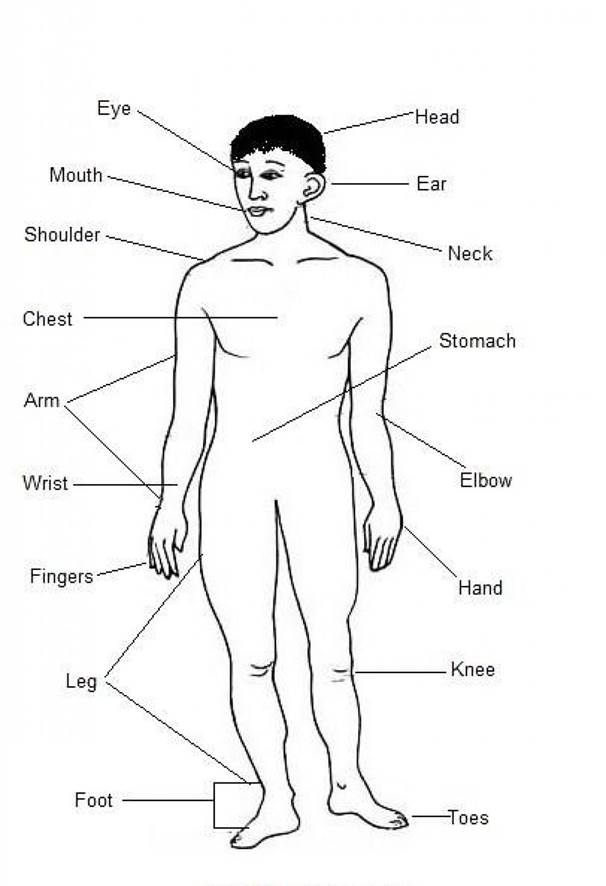 Our body is made up of bones, blood, nerves, muscles and covered with the skin. The body consists of the cells that form the tissues. A number of tissues make an organ. There are external organs and internal organs.

The external organs are five sense organs. They are eyes, nose, mouth, ears and the skin.

The eyeshelp us see all around us. We can read, watch and look with eyes.

The mouth contains the lips, the teeth, the tongue and the gums. We can chew, speak, and smile using the organs of our mouth.

The ears help us hear the sounds. We can differentiate people’s voices, music tones and other sounds because of our ears.

All internal organs are situated in the skull, in the chest and abdomen. Each internal organ of the body plays a specific role in the organism.

In the skull there is only one organ. It is the brain.It is the most important organ of the human body, and it controls all the other parts. It is the center of the nervous system, and is the most complex of all internal organs. The brain controls our sense of vision, hearing, taste, smell, balance, and feeling.

The Thyroid gland is the largest endocrine gland of the human body which is located in the neck. It helps to control the use of energy in the body.

The chest is separated from the abdomen by the diaphragm. The principal organs of the chest cavity are the gullet, the heart and the lungs.

The gullet connects the pharynx and the stomach. The esophagus is a long muscular tube that is 25 to 30 cm long.

There are two lungs - one in each half of the chest. They differ in size. The right lung is larger than the left one. These organs are responsible for respiration. Their function is to transport atmospheric oxygen into bloodstream, and release carbon dioxide from blood into the atmosphere.

There is the heart between the lungs behind the breastbone. After the brain, the heart is the second most important internal organ in humans. It is a muscular organ whose main function is to pump oxygenated blood throughout the body through blood vessels. This action is carried out by repeated and rhythmic contractions. On an average, the human heart beats about 72 times per minute, and weighs 250 to 300 gm in females, and 300 to 350 gm in males.

The lower part of the trunk is the abdominal cavity. The principal organs here are the stomach, the liver, two kidneys, the gallbladder, the pancreas, the spleen, the small and large intestines, the bladder and internal sex organs.

There is the liver with the gallbladder in the right upper abdominal part.

The liver is the largest and heaviest organ in the body. It works over all the products of digestion. The liver destroys poisons and bacteria which get into the blood.

The Gallbladder is one of the smallest internal organs of the human body. It helps in the process of digestion. It is located in the concave portion of liver that is called the gallbladder fossa. The length of this portion is about 8 cm in adults.

There is the stomach, the pancreasand the spleen in the left upper part of the abdominal cavity. Behind them there are the right and left kidneys at the back.

The muscular, hollow bag in the alimentary canal is called the stomach. It is the primary organ of the digestive system that is involved in the second phase of food digestion. The location of this organ is between the esophagus and small intestine.

Pancreas belong to both the endocrine and digestive systems. These organs produce important hormones like insulin, glucagon, and somatostatin. They also produce pancreatic juice that contains digestive enzymes. If the pancreas do not function normally, it may lead to diabetes mellitus.

The Spleen is very important in the immune system. Its function is to remove old red blood cells and also to recycle iron. The spleen in an adult human body is about 11 cm in length.

Kidneys serve as the most important part of the urinary system. Their function is regulation of electrolytes, maintenance of acid-base balance, regulation of blood pressure, production of urine, etc.

The small and large intestines occupy all the lower abdomen. Here is also the bladder and sex organs.

Intestines are a segment of the alimentary canal, and they extend from the stomach to the anus. They are divided into: small intestine and the large intestine.

Appendix is a blind-ended tube that is connected to the cecum. The appendix is located near the junction of the small and large intestines.

In Bladder, the urine that is filtered from the kidneys is collected before being disposed off by urination. The bladder is a muscular organ that is elastic in nature. It is located on the pelvic floor.

Ovaries are ovum-producing reproductive organs that are present in pairs in females. They are located in the lateral wall of the pelvis.

Uterus is the most important part of the female reproductive system. This organ is internally connected to the fallopian tubes on each side, and opens into the vagina at one end. In this organ the fetus develops during gestational period.