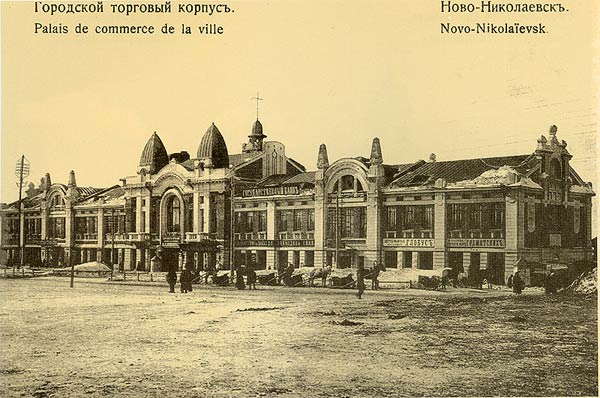 Novonikolaevsk Town Council asked the Tomsk architect Andrei D. Kryachkov to design the Trade Building on the Market Place. 16 shops to rent, each with an area of 136 m2, occupied the first floor. The second floor accommodated the Municipal Duma, the Town Council, the Treasury, a branch of the State Bank and a room for 1000 people. In the basement there were storage facilities, a boiler- room and an electric generator. Glass blocks in lead furring located on the pavement level provided lighting of the storage facilities. A similar construction still can be seen in Omsk, where Andrei Kryachkov at the same time built a Trade Building (Kryachkov's project was awarded the first prize at a competition).

The lengthy two-storied brick Trade Building of Novonikolaevsk has symmetrical facades, executed in the style of Russian Art Nouveau. The facade facing the Market Place had a little dome-topped fire tower. The arrangement of the fire tower with a lightning rod required a different decorative design for tops of lengthy eastern and western facades. Their composition is based on the contrast between the redbrick wall surface, white-plastered details and green-colored roofs of the building.

Andrei Kryachkov used the same decor for twelve elementary schools. It contrasted with the rest of the buildings in the new city and shaped a peculiar "specialty" of construction works financed by the local government. The first level is interpreted as a ground floor, it is rusticated and plastered.

Taken the overall brick construction of the walls, the most crucial elements- socle and capping slabs - are coated with grey granite. The exterior decor of the Trade Building in Novonikolaevsk reflected Kryachkov's impressions of the contemporary European architecture that he had seen during his half-a-year long tour of Germany, France and Italy in 1907. The Siberian architect was under the influence of the predominant currents of the European architecture of the time: the Wiener Sezession and the German Jugendstil. But the layout and decoration of the Trade Building in Novonikolaevsk also reflect the influence of Siberian architecture, namely of the City Trade Building for selling farinaceous foods ("Farinaceous Store Building") erected in Tomsk in 1907-1908. Kryachkov was familiar with that building designed by Tovii L. Fishel, a city architect and a representative of Art Nouveau.

It is noteworthy that Kryachkov mastered the Art Nouveau decorative arsenal only superficially, and not as an integral conception of architectural forms. This resulted in the stylistic discord between the interior and exterior of the building. So, Kryachkov used Corinthian order to decorate the reinforced concrete framework-four columns supporting the overhead cover of the sales room-that was new for the time. The Trade Building has gone through numerous repairs and alterations- some of the decor elements of the interior and of the facades have been lost, the fire tower has been dismantled, the through passage has been walled up. 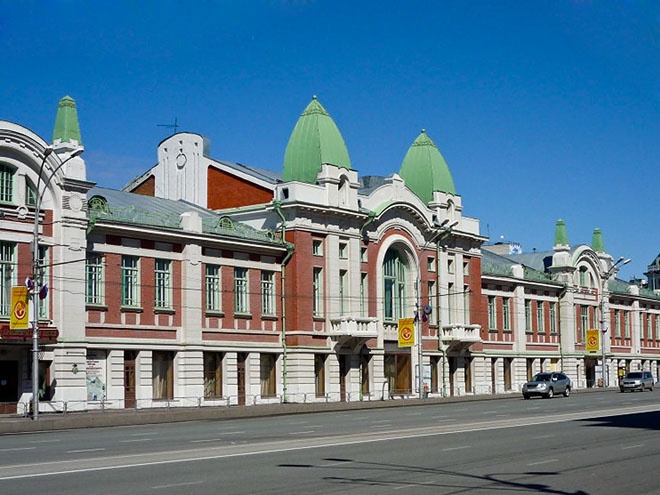 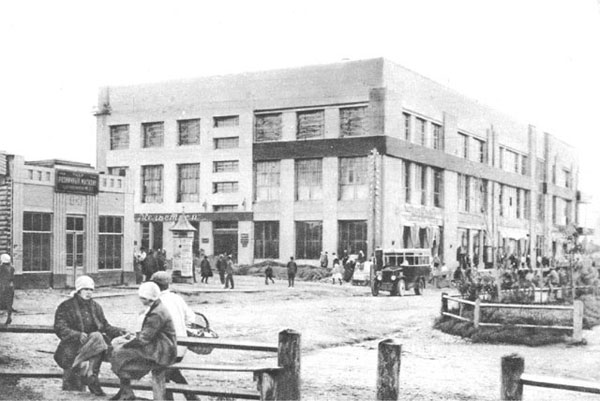 In 1925 the Moscow Architectural Society (MAO) organized a competition to design the facades of the building of the Industrial Bank (Prombank) of the USSR in Novosibirsk to "prepared plans and crosssections" by S.A. Shestov, a local Gosstroi engineer. The first floor held six stores with offices. On the second floor there was a transactions room in the center and two two-room apartments for directors in the left wing. The winning project was made and implemented by Alexander Shvidkovsky, Georgii Goltz and Sergei Kozhin. The Prombank building in Novosibirsk is very significant in the artistic heritage of architect and artist Georgii P. Goltz, one of the most talented followers of academician Ivan V. Zholtovsky's Neo-Renaissance school. Goltz graduated from VHUTEMAS, a world-renowned cradle of Russian avant-garde. At the beginning of his artistic career, when he had returned from his eight-month long tour of Italy and was under the influence of Alexander A. Vesnin's ideas, Goltz made several projects in the Constructivist manner. The Prombank building had brick exterior walls and an internal reinforced concrete framework. Its facade composition was based to the dynamic contrast between a pulsatory rhythm of massive pylons and large glass surfaces of high window-cases. Different sizes of bays were motivated by the pre-specified layout of the construction. On special occasions and on working days the building was decorated with agitation slogans and various propagandistic installations. The building's large dimensions determined the scale of the main square. Local newspapers mentioned the Constructivist architecture of the Prombank building and a Moscow touch in its ultra-modern forms. Addition of two stories and reconstruction resulted in a heavy classicist interpretation of the building caused by the necessity to form symmetrical composition of the ensemble on the city's main square, in front of the Opera Theater. Window openings were diminished; facades were decorated with flat five-storied pilasters of large order with big one-story-high massive capitals of socio-realistic interpretation, crowned with a mighty cornice and a high attic. 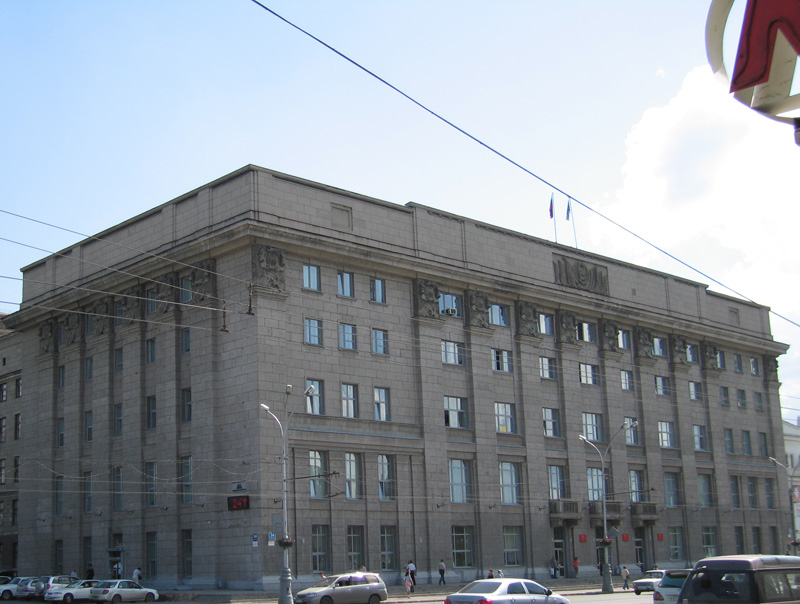