For parenteral use the dry sodium salt of penicillin is dispensed in ampoules usually in amounts of 100.000 or 200.000 units which are prepared in one of two ways.

A concentrated aqueous solution of sodium penicillin is dried in bulk from the frozen state. The dry material is reduced to a fine powder which is subjected to the usual routine tests (potency, toxicity, pyrogen content, sterility, moisture content). The desired amount is then measured into the ampoules by hand or automatic machines. After filling the ampoules are closed with sterilized rubber caps or stoppers and then removed from the sterile area for receiving metal covers.

The concentrated solution of penicillin is put into the ampoules in the desired amounts, generally by using an automatic filling machine which discharges measured (1-2 ml) amounts, frozen in them and evaporated to dryness in the frozen state.

The method of drying the aqueous solution of penicillin salts in the final containers is practiced more commonly in the large penicillin plants than the method of weighing the bulk dried salts into each individual ampoule, but the latter, though more laborious and time-consuming, has given equally good results with regard to sterility and keeping power.

The ampoules are first washed with ordinary water and then with pyrogen-free distilled water. They are sterilized in sterilizers provided with two doors at opposite ends. One leads into the non-sterile area for charging the sterilizers with washed, nonsterile ampoules, and the other leads into the sterile area for removing the ampoules after sterilization. After cooling the trays are conveyed to the automatic filling machines. Filling is carried out in a small air-conditioned room under a hood, provided with ultraviolet lamps. All parts of the filling machine which come in contact with the penicillin solution are daily dismantled, cleaned, and sterilized. Immediately after filling the metal lid is replaced.

For drying the penicillin solutions in ampoules these are conveyed on the trays on which they have been filled. First to the chambers and then to the drying plant. During the first part of the evaporation the temperature in ampoules is about -20 C and this slowly rises to room temperature as the evaporation process is completed. After the completion of the freeze-drying process the ampoules are stoppered with vacuum-dried sterile rubber stoppers in an air-conditioned sterile room. 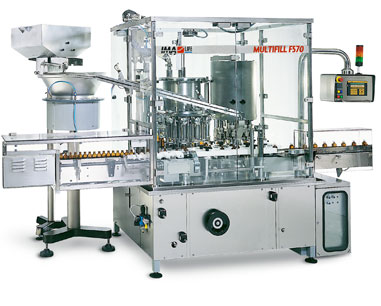 Fluid extracts. Plant drug constituents may be concentrated by extraction with alcohol or mixtures of alcohol and water. Such solutions are so constituted that 1 cc. of fluid extract represents 1 gram of the parent crude drug. Such highly concentrated solutions are administered in small dosage.

Spirits. These volatile substances-whether solid, liquid or gaseous-are dissolved in alcoholic or in hydro-alcoholic media, the resulting solution is known as spirit. Less concentrated than other liquids are the tinctures, introduced by Galen. These are alcoholic or hydro alcoholic extracts of nonvolatile drugs of plant or animal origin. Such solutions frequently represent (per volume) one-tenth mass of the parent drug.

The hydro-alcoholic, sweetened solutions of medical substances taste pleasant and are usually stable for long periods. Of special interest is the I so-alcoholic Elixir the alcohol content of which may be varied by the pharmacist to suit the exigencies of the prescription at hand. Bitter substances like barbital may be conveniently dissolved in Aromatic Elixir, which supplies at once an alcoholic medium and a pleasant flavor. Some elixirs are colored in alluring shades.

Infusions. The teas used chiefly by country grandmothers, who extract the constituents of plant product with boiling water. These substances tend to deteriorate in strength.

Aromatic Waters. Most aromatic waters are used simply as pleasant-tasting solvents for drugs; a few may have a medicinal action (e.g., peppermint water). They are solutions of slightly soluble volatile substances in distilled water.

Emulsions. Mixture of two or more liquids in which one is dispersed in the other as microscopic or ultramicroscopic droplets.

Emulsions are stabilized by agents (emulsifiers) that (e.g., in the case of soap or detergent molecules) form films at the droplets surface or (e.g., in the case of colloidal carbon, bentonite clay, proteins, or carbohydrate polymers) impart mechanical stability. Less-stable emulsions eventually separate spontaneously into two liquid layers; more-stable ones can be destroyed by inactivating the emulsifier, by freezing, or by heating. Polymerization reactions are often carried out in emulsions.