Now read the text about Tower Bridge to see whether you are right. 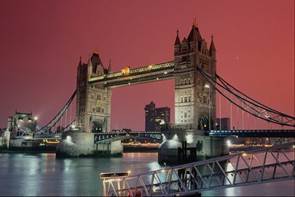 Tower Bridge is a bridge in London, England, over the River Thames. It is close to the Tower of London, which gives it its name. It is occasionally incorrectly referred to as London Bridge, which is in fact the next bridge upstream.

In the second half of the 19th century increased commercial development in the East End of London led to a requirement of a new river crossing downstream of London Bridge. However, a traditional bridge could not be built because it would cut off access to the port facilities situated at that time in the Pool of London, between London Bridge and the Tower of London. A tunnel beneath the Thames, the Tower Subway was opened in 1870, but it could only accommodate pedestrian traffic.

A Special Bridge or Subway Committee was formed in 1876 to find a solution to the river crossing problem. It opened the design of the new crossing to public competition. Over 50 designs were submitted including one from civil engineer Sir Joseph Bazalgette. However, the evaluation of the designs was surrounded by controversy, and it was not until 1844 that a design submitted by Horace Jones, the City Architect, was finally approved. Jones’ design was for a bascule bridge 800 feet (244 m) in length with two towers each 213 feet (65 m) high, built on piers.

The central span of 200 feet (61m) between the towers is split into two equal bascules, or leaves, which can be raised to an angle of 86 degrees to allow river traffic to pass through. Although each bascule weighs over 1, 000 tons, they are counterbalanced to minimize the force and time required to raise them, and they can be raised in under one minute. The original hydraulic raising mechanism was powered by pressurized water stored in six accumulators. Water was pumped into the accumulators by steam engines. Although the bridge is raised today electrically, the original steam engines are preserved as a visitor attraction.

Construction of the bridge started in 1886 and took 8 years, employing 5 major contractors and 432 construction workers. Two massive piers containing over 70, 000 tons of concrete were sunk into the river bed to support the construction. Over 11, 000 tons of steel provided the framework for the towers and walkways. This was then clad in Cornish granite and Portland Stone, both to protect the underlying steelwork and to give the bridge a more pleasant appearance. Jones died in 1887, and his chief engineer, Sir John Wolfe-Barry, took over the project.

Wolfe-Barry replaced Jones’ original medieval style of façade with more ornate Victorian gothic style that makes the bridge such a distinctive landmark. The bridge was opened in 1894. The official opening ceremony was conducted by the Prince of Wales, the future King Edward VII of the United Kingdom and his wife Alexandra of Denmark.

The high-level walkways between the towers were never much used and were closed in 1910, but have now been reopened. The towers and walkways contain an exhibition about the Bridge’s history, including the original steam engines that once powered the Bridge bascules. A “Behind the Scene” tour can be booked in advance where it is possible to see the bridge’s command center (where the raising of the bridge is controlled when a vessel passes underneath). The bascules of the bridge are raised round five hundred times a year. The bridge sits almost directly above the Tower Subway, the world’s first underground tube railway (1870), which, until the Bridge was opened, was the shortest way to cross the river from Tower Hill to Tooley Sreet.