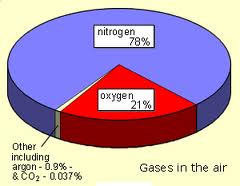 ATMOSPHERE is a layer of gases surrounding the planet Earth that is retained by Earth's gravity. Air is the name given to atmosphere used in breathing and photosynthesis. contains roughly (by volume) 78.09% nitrogen, 20.95% oxygen, 0.93% argon, 0.039% carbon dioxide, and small amounts of other gases. Air also contains a variable amount of water vapor, on average around 1%.

ü The air is rather stable in the bottom layer of atmosphere. There is oxygen in the air, which breaks into atoms under the influence of ultraviolet rays on 200-1000-km height.

Physical properties of the air:

These properties are changing with height.

Atmosphere is divided into the following layers: 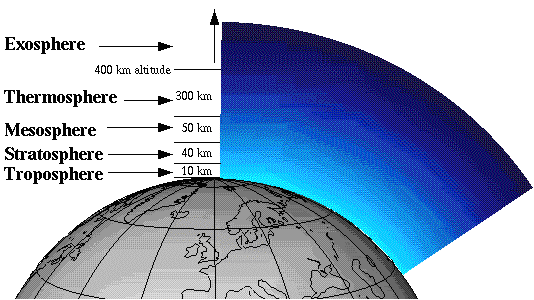 ü is the lowest portion of Earth's atmosphere, there is the air;

ü contains roughly 80% the mass of the atmosphere;

ü Troposphere’s thickness above poles reaches 9 km, above temperate zone – 10-12 km, and above equator – 15-17 km. The clouds and fogs appear and the weather is formed.

ü In connection with absorption of the solar radiation by ozone, presenting in the air, temperature rise during the height increase in this layer.

ü Ozone is situated at a height of 25-30 km and forms the ozone layer.

ü is the layer where most meteors burn up upon entering the atmosphere.

ü Density of the air is lower in 200 times, and temperature settles.

ü There is the highest temperature in the upper layer that is why this layer is called thermosphere.

ü Thermosphere is divided into the ionosphere and exosphere.