The role of antigen becomes critical when it interacts with and activates mature, antigenically committed T and B lymphocytes, bringing about expansion of the population of cells with a given antigenic specificity. In this process of clonal selection,an antigen binds to a particular T or B cell and stimulates it to divide repeatedly into a clone of cells with the same antigenic specificity as the original parent cell (Figure 7).

Clonal selection provides a framework for understanding the specificity and self/nonself recognition that is characteristic of adaptive immunity. Specificity is shown because only lymphocytes whose receptors are specific for a given epitope on an antigen will be clonally expanded and thus mobilized for an immune response. Self/nonself discrimination is accomplished by the elimination, during development, of lymphocytes bearing self-reactive receptors or by the functional suppression of these cells in adults.

Immunologic memory also is a consequence of clonal selection. During clonal selection, the number of lymphocytes specific for a given antigen is greatly amplified. Moreover, many of these lymphocytes, referred to as memory cells, appear to have a longer life span than the naive lymphocytes from which they arise. The initial encounter of a naive immunocompetent lymphocyte with an antigen induces a primary response;a later contact of the host with antigen will induce a more rapid and heightened secondary response. The amplified population of memory cells accounts for the rapidity and intensity that distinguishes a secondary response from the primary response. 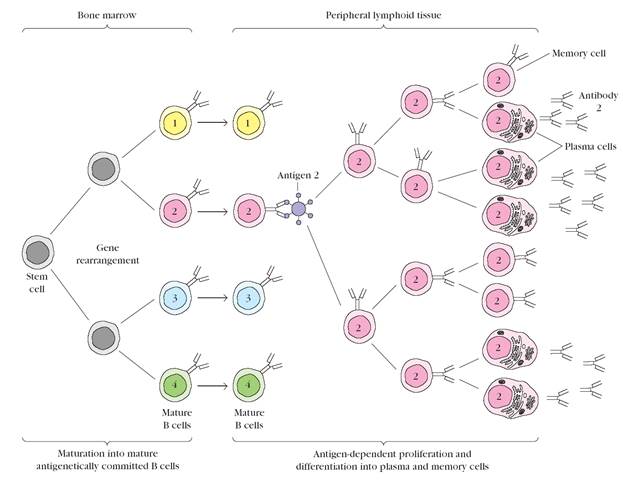 Figure 7. Maturation and clonal selection of B lymphocytes. Maturation, which occurs in the absence of antigen, produces antigenically committed B cells, each of which expresses antibody with a single antigenic specificity (indicated by 1, 2, 3, and 4). Clonal selection occurs when an antigen binds to a B cell whose membranebound antibody molecules are specific for epitopes on that antigen. Clonal expansion of an antigen-activated B cell (number 2 in this example) leads to a clone of memory B cells and effector B cells, called plasma cells; all cells in the expanded clone are specific for the original antigen. The plasma cells secrete antibody reactive with the activating antigen. Similar processes take place in the T-lymphocyte population, resulting in clones of memory T cells and effector T cells; the latter include activated TH cells, which secrete cytokines, and cytotoxic T lymphocytes (CTLs).

In the humoral branch of the immune system, antigen induces the clonal proliferation of B lymphocytes into antibody-secreting plasma cells and memory B cells. As seen in Figure 8 a, the primary response has a lag of approximately 5–7 days before antibody levels start to rise. This lag is the time required for activation of naive B cells by antigen and TH cells and for the subsequent proliferation and differentiation of the activated B cells into plasma cells. Antibody levels peak in the primary response at about day 14 and then begin to drop off as the plasma cells begin to die. In the secondary response, the lag is much shorter (only 1–2 days), antibody levels are much higher, and they are sustained for much longer. The secondary response reflects the activity of the clonally expanded population of memory B cells. These memory cells respond to the antigen more rapidly than naive B cells; in addition, because there are many more memory cells than there were naive B cells for the primary response, more plasma cells are generated in the secondary response, and antibody levels are consequently 100- to 1000-fold higher. 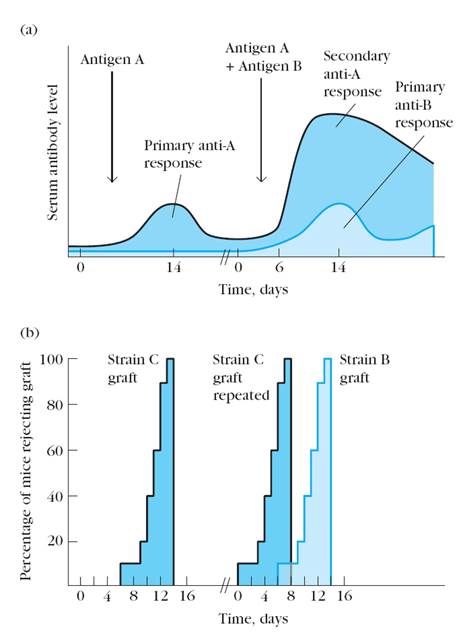 Figure 8. Differences in the primary and secondary response to injected antigen (humoral response) and to a skin graft (cell-mediated response) reflect the phenomenon of immunologic memory. (a) When an animal is injected with an antigen, it produces a primary serum antibody response of low magnitude and short duration, peaking at about 10–17 days. A second immunization with the same antigen results in a secondary response that is greater in magnitude, peaks in less time (2–7 days), and lasts longer (months to years) than the primary response. Compare the secondary response to antigen A with the primary response to antigen B administered to the same mice. (b) Results from a hypothetical experiment in which skin grafts from strain C mice are transplanted to 20 mice of strain A; the grafts are rejected in about 10–14 days. The 20 mice are rested for 2 months and then 10 are given strain C grafts and the other 10 are given skin from strain B. Mice previously exposed to strain C skin reject C grafts much more vigorously and rapidly than the grafts from strain B. Note that the rejection of the B graft follows a time course similar to that of the first strain C graft.

In the cell-mediated branch of the immune system, the recognition of an antigen-MHC complex by a specific mature T lymphocyte induces clonal proliferation into various T cells with effector functions (TH cells and CTLs) and into memory T cells. The cell-mediated response to a skin graft is illustrated in Figure 8 b by a hypothetical transplantation experiment. When skin from strain C mice is grafted onto strain A mice, a primary response develops and all the grafts are rejected in about 10–14 days. If these same mice are again grafted with strain C skin, it is rejected much more vigorously and rapidly than the first grafts. However, if animals previously engrafted with strain C skin are next given skin from an unrelated strain, strain B, the response to strain B is typical of the primary response and is rejected in 10–14 days. That is, graft rejection is a specific immune response. The same mice that showed a secondary response to graft C will show a primary response to graft B. The increased speed of rejection of graft C reflects the presence of a clonally expanded population of memory TH and TC cells specific for the antigens of the foreign graft. This expanded memory population generates more effector cells, resulting in faster graft rejection.