Case is the immanent morphological category of the noun manifested in the forms of noun declension which shows the relations of the nounal referent to other objects and phe­nomena. Thus, the case of the noun is a morphological-declensional form. This category is expressed in English by the opposition of the form in -'s [-z, -s, -iz], usually called the "possessive" case, or more traditionally, the "genitive" case (* The traditional term "genitive case" seems preferable on the ground that not all the meanings of the genitive case are "possessive") to the unmarked form of the noun, usually called the "common" case. The apostrophized ‘s serves to distinguish in writing the singular noun in the genitive case from the plural noun in the common case. E.g.: the man's duty, the President's decision, Max's letter; the boy's ball, the clerk's promo­tion.

There are four main views on the case problem in English:

The theory of positional casesis based on the functions of the unchangeable noun forms in the sentence. This theory is directly connected with the old gram­matical tradition. In accord with the theory of positional cases, the unchangeable forms of the noun are differentiated as different cases by virtue of the functional positions occupied by the noun in the sentence. Thus, the English noun, on the analogy of classical Latin grammar, would distinguish, besides the in­flexional genitive case, also the non-inflexional, i.e. purely positional cases: nominative, vocative, dative, and accusative which can be exemplified as follows.

E.g. The nominative case (subject to a verb): Rain falls

The vocative case (address): Are you coming, my friend.

Thedative case (indirect object to a verb): I gave John a penny.

The accusative case (direct object, and also object to a prep­osition): The man killed a rat. The earth is moistened by rain.

The cardinal blunder of this view is, that it substitutes the functional characteristics of the part of the sentence for the morphological features of the word class. In reality, the case forms as such serve as means of expressing the functions of the noun in the sentence, and not vice versa.

The second view may be called the "theory of preposi­tional cases". Like the theory of positional cases, it is also connected with the old school grammar teaching, and was advanced as a logical supplement to the positional view of the case. In accord with the prepositional theory, combinations of nouns with prepositions in certain object and attributive collocations should be understood as morphological case forms. To these belong first of all the "dative" case (to+Noun, /or+Noun) and the "genitive" case (of+Noun). These prep­ositions, according to G. Curme, are "inflexional prep­ositions", i.e. grammatical elements equivalent to case-forms. The would-be prepositional cases are generally taken (by the scholars who recognize them) as co-existing with positional cases, together with the classical inflexional genitive com­pleting the case system of the English noun.

The prepositional theory, though somewhat better ground­ed than the positional theory, nevertheless can hardly pass a serious linguistic trial. As is well known from noun-declen­sional languages, all their prepositions, and not only some of them, do require definite cases of nouns (prepositional case-government); this fact, together with a mere semantic observation of the role of prepositions in the phrase, shows that any preposition due to its functional nature stands in essentially the same general grammatical relations to nouns. It should follow from this that not only the o/-, to-, and /or-phrases, but also all the other prepositional phrases in English must be regarded as "analytical cases". As a result of such an approach illogical redundancy in terminol­ogy would arise: each prepositional phrase would bear then another, additional name of "prepositional case", the total number of the said "cases" running into dozens upon dozens without any gain either to theory or practice [Ilyish, 42].

The third view of the English noun case recognizes a limited inflexional system of two cases in English, one of them marked and the other one unmarked. This view may be called the "limited case theory". It was formulated by such scholars as H. Sweet, 0. Jespersen. The limited case theory in its modern presentation is based on the explicit oppositional approach to the recogni­tion of grammatical categories. In the system of the English case the functional mark is defined, which differentiates the two ease forms: the possessive or genitive form as the strong member of the categorial opposition and the common, or "non-genitive" form as the weak member of the categorial opposition.

The three theories proceeded from the assumption that the English noun does distinguish the grammatical case in its functional structure. However, another view of the prob­lem of the English noun cases has been put forward which sharply counters the theories hitherto observed. This view approaches the English noun as having completely lost the category of case in the course of its historical development. The category ofCase of English nouns is restricted in its realization semantically. The traditional approach to the realization ofCase in Modern English presupposed distinc­tions between the two cases: the Common case and the Posses­sivecase. The case opposition, accordingly, was assumed to be the following:

Since the category of Case is the main nounal category, it is the case-forms that constitute the paradigm of the noun. The number of case-forms varies considerably from language to language. A regularity is traceable as the following. The more cases a language has the more multiple the paradigm of the noun in this language is. And vice versa, the scanty noun-paradigm is the consequence that the case-system of the lan­guage is reduced.

It is clear that Semantic cases are conceptual entities which are universal, since they are obligatorily verbalized by human languages but their lingual representation is idioethnic. Semantic cases are relational notions, they reflect objective relations between things and phenomena of reality in all their variety. Therefore, there are very many Semantic cases in general.

Case has been traditionally associated with inflected cases only, which represent morphologically different Se­mantic cases thus reflecting, accordingly, relations of sub­stances to other substances or actions or qualities, serving at the same time as device of connecting words in word-groups and sentences., "The number of cases in a language 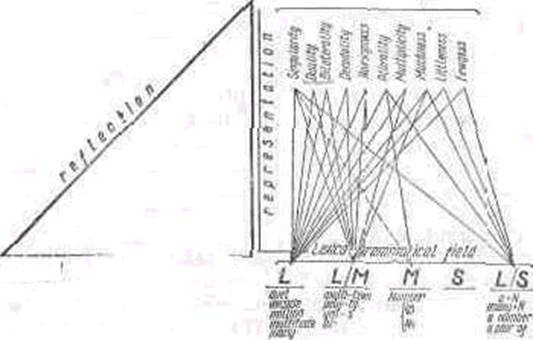 varies considerably, usually from 2 to 6 or 7, but seven cases is no limit at all. We may find languages which seem to have even more than a score of cases: Estonian — 14, Finish — 15, Hungarian—22. Modern linguistics suggests generally accepted names for cases, such as Nominative, Genitive, Dative, Accusative, Ablative, Instrumental, Translative, Allative, Vocative and some others.

The category of number of English nouns is restricted in its realisation by the implicit meaning of Countableness/Uncountableness, which is realised only in the subclass of countable nouns, whereas the uncountable nouns do not have categorial number forms.

The other non-productive way of expressing the number opposition are

The two subclasses of uncountable nouns are usually re­ferred to, respectively, as singularia tantum (only singular) and pluralia tantum (only plural). In terms of oppositions we may say that in the formation of the two subclasses of uncountable nouns the number opposition is "constantly" (lexically) reduced either to the weak member (singularia tantum) or to the strong member (pluralia tantum).

If we compare many and much we may notice that they differ in the aspects of Quantitiveness with which these elements correlate: many — Numerosity, much — Muchness. There should be certain regularities in the use of many and much in actual speech conditions because the actualialisation of their meanings is predetermined by the appropriate contextual conditions. 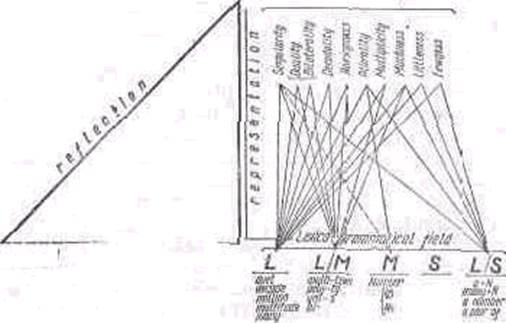 Alongside the number-forms there are in English va­rious lexical, lexico-morphological and lexico-syntactical de­vices expressing Quantitiveness. English being analytical in structure, lexico-syntactical devices of rendering quantitive notions prevail over morphological ones. The class of quan­tifiers is composed of various notional and semi-notional elements which represent lingually different aspects of Quantitiveness.

The category of gender is expressed in English by the correlation of nouns with the personal pronouns of the third person, which serve as specific gender classifiers.

The category of gender is strictly oppositional. It is formed by two oppositions related to each other on a hierarchical basis.

The oppositional structure of the category of gender can be shown schematically.