This type of interstitial implantation occurs in humans and a few other mammals. The process starts around the7-th day, and on about the 9-th day the embryo is totally submerged in the endometrium, from which it will receive protection and nourishment during the pregnancy. Within implantation cavity, the blastocyst is in fluid medium consisting of extravasated blood, uterine milk and the cytolytic products which follow the breakdown of surface and glandular epithelia, decidual cells and vascular endothelium. The syncytiotrophoblast engulfs this material - thus, histiotrophic type of the embryo' nutrition occurs during the first 2 weeks.

Gastrulation. In mammals gastrulation occurs by ways of combination of delaminationandimmigration. The first phase of gastrulation – the delamination coincides in time with the process of implantation and results in formation of the bilaminar disk-shaped mass of the cells – germ disk:

· the upper layer of the disk called the epiblast consists of high columnar cells;

· the lower layer called the hypoblast consists of cuboidal cells.

• The epiblast subsequently gives rise to all 3 germ layers of the embryo. 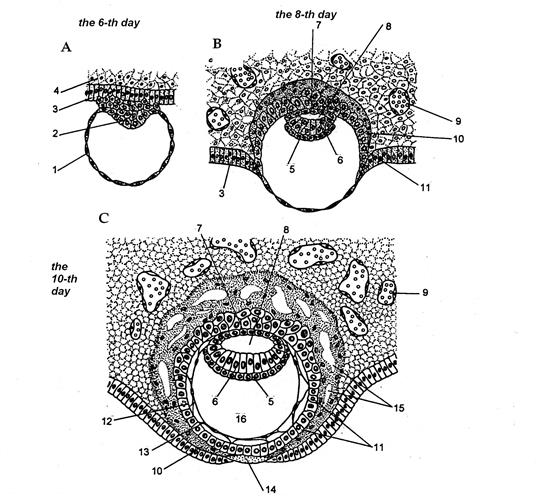 When the extraembryonic mesoderm grows into the primary villi, they become the secondary chorionic villi(Fig.28 ).