There are three modes of travel such as by land, water and air. During centuries man has been dreaming about fast means of transport: magic carpet, high speed boots and so on. But it is only in fairly recent years that man has been able to build really reliable machines to transport him efficiently and safely in all environments. Motor cars travel on solid ground and have only to be propelled along. Boats and ships are supported by the water and will remain afloat under all normal conditions. An aircraft is heaver man the air in which it has to fly, yet it must be got off the ground, made to stay in the air and finally brought back to earth gently without damage. But in design all these means of transport have one common element — the internal combustion engine.

Internal combustion engine. The internal combustion engine burns fuel within the cylinders and converts the expanding force of the combustion or «explosion» into rotary force used to propel the vehicle. There are several types of internal combustion engines: two and four cycle reciprocating piston engines, gas turbines and rotary combustion engines. The four cycle reciprocating engine has been refined to such a degree mat it has almost complete dominance in the automotive field. The engine is the heart of the automobile. It converts fuel into the energy that powers the automobile. To operate, it requires clean air for the fuel, liquid for cooling, electricity (which it generates) for igniting the fuel, and oil for lubrication. A battery and electric starter get it going. Each «cylinder» of the typical car engine has a «piston» which moves back and forth within the cylinder (this is called <<reciprocating»). Each piston is connected to the «crankshaft» by means of a link known as a «connecting rod». In 1876, a German engineer named Dr. Otto produced an engine that worked using the four-stroke cycle. « Four-stroke» refers to the number of piston strokes required to complete a cycle (a cycle being a sequence of constantly repeated operations). It takes two complete revolutions of the crankshaft to complete the cycle. 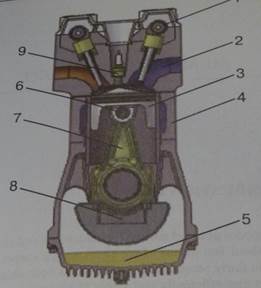