Verbals. The Infinitive and the Participle

The main trends of their evolution in ME and NE can be defined as gradual loss of most nominal features (except syntactical functions) and growth of verbal features. The simplifying changes in the verb par­adigm, and the decay of the OE inflectional system account for the first of these trends — loss of case distinctions in the infinitive and of forms of agreement in the Participles.

§ 470. The Infinitive lost its inflected form (the so-called “Dat. case”) in Early ME. OE writan and tō writanne appear in ME as (to) writen, and in NE as (to) write. The preposition tō, which was placed in OE before the inflected infinitive to show direction or purpose, lost its prepositional force and changed into a formal sign of the Infinitive. In ME the Infinitive with to does not necessarily express purpose. In order to reinforce the meaning of purpose another preposition, for, was sometimes placed before the to-infinitive. Cf.:

(‘To live in delight was always his habit.’)

... to Caunterbury they wende

The hooly, blisful martir for to seke. (Chaucer)

(‘They went to Canterbury to seek the holy blissful martyr.’)

It may have been important to preserve the infinitive marker to in order to distinguish the infinitive from other forms built from the Present tense stem, which had lost their endings. (Cf. ME 1st p. sg finde, 2nd findest, 3rd findeth, pl — finden — Inf. finden; Early NE find) 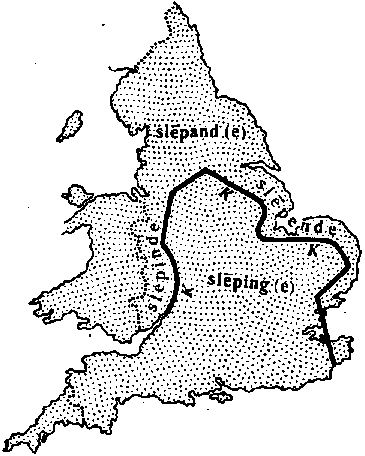 Forms of Participle I in Middle English dialects

§ 471. The distinctions be­tween the two participles were preserved in ME and NE: Par­ticiple I had an active mean­ing and expressed a process or quality simultaneous with the events described by the predicate of the sentence. Par­ticiple II had an active or passive meaning depending on the transitivity of the verb, and expressed a preceding ac­tion or its results in the sub­sequent situation.

The form of Participle I in Early ME is of special interest, as it displayed considerable dialectal differences (see Table 5 in § 464). As shown in the map, the Southern and Mid­land forms were derived from the present tense stem with the help of -ing(e), while other dialects had forms in -inde, -ende and -ande. The first of these variants — finding(e), looking(e)— became the dominant form in the literary lan­guage. Participle I coincided with the verbal noun, which was formed in OE with the help of the suffixes -ung and -ing, but had preserved only one suffix, -ing, in ME. (The fusion of the Participle with the verbal noun was an important factor of the growth of a new verbal, the Ger­und, and played a certain role in the development of the Continuous forms, see § 474 and § 520. )

§ 472. The forms of Participle II in ME are shown in Table 5 (§ 464) and their evolution in different morphological classes of verbs is described in detail below (§ 475 ff). In ME the weak verbs built Participle II with the help of the dental suffix -(e)d, -t, the strong verbs — with the help of vowel gradation and the suffix -en. The Past Participle and the Past tense of the weak verbs fell together by the end of ME, when the unstressed [ə] in the ultimate or penultimate syllable was dropped: ME lookede and looked merged into NE looked; the Past Participle of the strong verbs coincided with the Past pl stem in ME in the classes which had the same gradation vowel in both these stems, that is in Class 1 and part of Class 3, e. g. OE riden and ridon became ME riden; OE funden and fundon became ME founden. In Early NE there was a strong tendency to eliminate the difference between the Past tense and Parti­ciple II in all strong verbs — but it was cut short in the period of nor­malisation, so that over 50 modern non-standard verbs have preserved the distinction (see § 479).

The OE prefix ʒe-, which was a frequent marker of the Past Parti­ciple was weakened to i- or y- in ME. It was typical of Southern ME dialects and is fairly common in Chaucer’s poetry, but rare in prose (prob­ably it was added if required by rhythm, which means that it was not an obligatory grammatical marker). Cf.:

And wente for to doon his pilgrimage

to do his pilgrimage’)

That hem hath holpen whan that they were seeke

(‘What has helped them when they were ill’)

§ 473. Being verbal adjectives Participles I and II lost their gen­der, case and number distinctions and also the weak and strong forms in the same way as the adjectives, and even somewhat earlier. They sometimes took -e in Early ME and were totally uninflected in Late ME. Cf.:

(‘Of those above mentioned councillors’)

(‘Her stockings were made of fine scarlet red, tied very straight’)

It is important to note that while the verbals lost their nominal grammatical categories, they retained their nominal syntactic features: the syntactic functions corresponding to those of the noun and adjec­tives; they also retained their verbal syntactic features — the ability to take an object and an adverbial modifier (the growth of other verbal features is connected with the development of analytical forms — see § 523 ff).