§ 464. The decay of OE inflections, which transformed the nominal system, is also apparent in the conjugation of the verb — though to a lesser extent. Many markers of the grammatical forms of the verb were reduced, levelled and lost in ME and Early NE; the reduction, levelling and loss of endings resulted in the increased neutralisation of formal oppositions and the growth of homonymy.

Conjugation of Verbs in Middle English and Early New English[53]

ME forms of the verb are represented by numerous variants, which reflect dialectal differences and tendencies of potential changes. The intermixture of dialectal features in the speech of London and in the literary language of the Renaissance played an important role in the formation of the verb para­digm. The Early ME dia­lects supplied a store of parallel variant forms, some of which entered literary English and — with certain modifications — were even­tually accepted as standard.

The simplifying changes in the verb morphology af­fected the distinction of the grammatical categories to a varying degree. 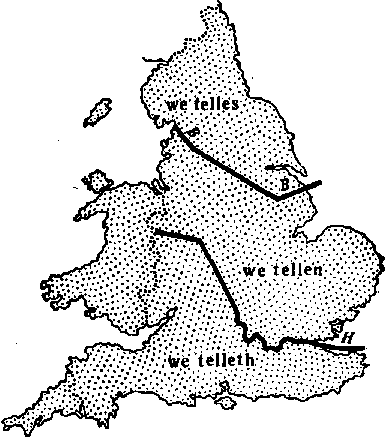 § 465. Number distinc­tions were not only preserved in ME but even became more consistent and regular; towards the end of the pe­riod, however, — in the 15th c. — they were neu­tralised in most positions.

In the 13th and 14th c. the ending -en turned into the main, almost universal, marker of the pl forms of the verb: it was used in both tenses of the Indicative and Subjunctive moods (the variants in -eth and -es: in the Present Indicative were used only in the Southern and Northern dialects). In most classes of strong verbs (except Class 6 and 7) there was an additional distinctive feature between the sg and pl forms in the Past tense of the Indicative mood: the two Past tense stems had different root- vowels (see fand, fandest, fand and founden in the table). But both ways of indicating pl turned out to be very unstable. The ending -en was fre­quently missed out in the late 14th c. and was dropped in the 15th; the Past tense stems of the strong verbs merged into one form (e. g. found, wrote — see the forms in Table 5 and § 478). All number distinc­tions were thus lost with the exception of the 2nd and 3rd p., Pres., tense Indic. mood: the sg forms were marked by the endings -est and -eth/-es and were formally opposed to the forms of the pl. (Number dis­tinctions in the 2nd p. existed as long as thou, the pronoun of the 2nd p. sg was used, see § 466 and § 441. For the verb to be — which has retained number distinction in both tenses of the Indic. mood — see § 494. )

(‘Then folks long to go on pilgrimages.’)

§ 466. The differences in the forms of Person were maintained in ME, though they became more variable. The OE endings of the 3rd p sg — -p, -ep, -iap — merged into a single ending -(e)th.

The variant ending of the 3rd p. -es was a new marker first recorded in the Northern dialects. It is believed that -s was borrowed from the pl forms which commonly ended in -es in the North; it spread to the sg and began to be used as a variant in the 2nd and 3rd p., but later was restricted to the 3rd.

In Chaucer's works we still find the old ending -eth. Shakespeare uses both forms, but forms in -s begin to prevail. CL:

He rideth out of halle. (Chaucer)

My life... sinks down to death. (Shakespeare) but also:

But beauty’s waste hath in the world an end. (Shakespeare)

In Shakespeare’s sonnets the number of -s-forms by far exceeds that of -eth-forms, though some short verbs, especially auxiliaries, take -th: hath, doth. Variation of -s/-eth is found in poetry in the 17th and 18th c.: the choice between them being determined by the rhymes:

But my late spring no buds or blossom shew' th.

In the early 18th c. -(e)s was more common in private letters than in official and literary texts, but by the end of the century it was the dominant inflection of the 3rd p. sg in all forms of speech. (The phonet­ic development of the verb ending -(e)s since the ME period is similar to the development of -(e)s as a noun ending (see § 435). The use of -eth was stylistically restricted to high poetry and religious texts.

The ending -(e)st of the 2nd p. sg became obsolete together with the pronoun thou. The replacement of thou by you/ye eliminated the distinction of person in the verb paradigm — with the exception of the 3rd p. of the Present tense.

§ 467. Owing to the reduction of endings and levelling of forms the formal differences between the moods were also greatly obscured. In OE only a few forms of the Indicative and Subjunctive mood were homonym­ous: the 1st p. sg of the Present Tense and the 1st and 3rd p. sg of the Past. In ME the homonymy of the mood forms grew.

The Indicative and Subjunctive moods could no longer be distinguished in the pl, when -en became the dominant flection of the Indicative pl in the Present and Past. The reduction and loss of this ending in Early NE took place in all the forms irrespective of mood.

In the Past tense of strong verbs the difference between the moods in the sg could be shown by means of a root-vowel interchange, for the Subjunctive mood was derived from the third principal form of the verb — Past pl — while the sg forms of the Indicative mood were derived from the second principal form — Past sg. When, in the 15th c. the two Past tense stems of the strong verbs merged, all the forms of the moods in the Past tense fell together with the exception of the verb to be. which retained a distinct form of the Subjunctive in the Past sg — were as opposed to was (see § 494).

Compare the forms of the verb in the following quotations from Shakespeare used in similar syntactic conditions; some forms are dis­tinctly marked, others are ambiguous and can be understood either as Subjunctive or as Indicative:

If there be truth in sight, you are my Rosalind...

If thou survive my well contented day... — Subj.

Against that time, if ever that time come... — Subj.

§ 468. The distinction of tenses was preserved in the verb paradigm through all historical periods.[55] As before, the Past tense was shown with the help of the dental suffix in the weak verbs, and with the help of the root-vowel interchange — in the strong verbs (after the loss of the endings the functional load of the vowel interchange grew, cf. OE cuman — cuom — cōmon, differing in the root-vowels and endings, and NE come — came). The only exception was a small group of verbs which came from OE weak verbs of Class I: in these verbs the dental suffix fused with the last consonant of the root — [t] — and after the loss of the endings the three principal forms coincided: cf. OE settan — sette— ʒe-set(ed), ME seten — sette — set, NE set — set — set (see the development of non-standard verbs below, § 484 ff. ).