§ 378. One of the most important sound changes of the Early ME period was the loss of OE diph­thongs and the growth of new diphthongs, with new qualitative and quantitative distinctions.

OE possessed a well de­veloped system of diph­thongs: falling diphthongs with a closer nucleus and more open glide arranged in two symmetrical sets — long and short: [ea:, eo:, ie:] and [ea, eo, ie] (see § 133). Towards the end of the OE period some of the diphthongs merged with monophthongs: all diph­thongs were monophthon­gised before [xt, x't] and after [sk']; the diphthongs [ie:, ie] in Late WS fused with [y:, y] or [i:, i]. Their further development does not differ from the development of corresponding monophthongs. 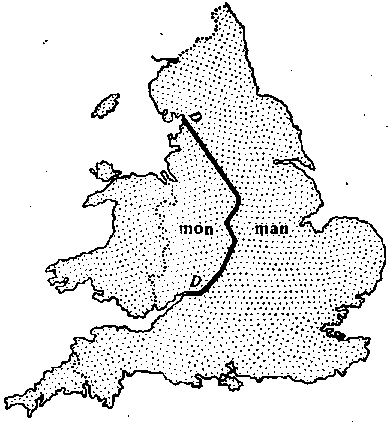 § 380. As a result of these changes the vowel system lost two sets of diphthongs, long and short. In the meantime a new set of diphthongs developed from some sequences of vowels and consonants due to the vocalisation of OE [j] and [γ], that is to their change into vowels,

In Early ME the sounds [j] and [γ] between and after vowels changed into [i] and [u] and formed diphthongs together with the preceding vowels, e.g. OE dæʒ > ME day [dai]. These changes gave rise to two sets of diphthongs: with i-glides and u-glides. The same types of diph­thongs appeared also from other sources: the glide -u developed from OE [w] as in OE snāw, which became ME snow [snou], and before [x] and [l] as in Late ME smaul (alongside smal)and taughte (NE snow, small, taught). In the two latter cases the consonants were not vocalised and the glide arose between the back consonant and the pre­ceding vowel. See more examples in Table 3. (If the preceding vowels were [i] or [u] the results of the vocalisation were long monophthongs, e.g. OE niʒon > ME nyne [ni:n(ə)], OE fuʒol > ME fowl [fu:l] (NE nine, fowl).

In addition to the diphthongs which developed from native sources, similar diphthongs — with i- and u-glides — are found in same ME loan-words, e.g. [ɔi] in ME boy, joy, [au] in ME pause, cause ['pauzə, 'kauzə]. (The diphthong [au] occurred also in French borrowings be­fore a nasal, in imitation of Anglo-Norman pronunciation, e.g. ME straunge.)

§381. The formation of new diphthongs in ME was an important event in the history of the language. By that time the OE diphthongs had been contracted into monophthongs; the newly formed ME diph­thongs differed from the OE in structure: they had an open nucleus and a closer glide; they were arranged in a system consisting of two sets (with i-glirtes and u-glides) but were not contrasted through quantity as long to short.