§ 375. As compared with quantitative changes, qualitative vowel changes in Early ME were less important. They affected several mono­phthongs and displayed considerable dialectal diversity. On the whole they were independent of phonetic environment.

The OE close labialised vowels [y] and [y:] disappeared in Early ME, merging with various sounds in different dialectal areas. The treat­ment of [y] and [y:] in ME can be regarded as evidence of growing dialectal divergence. At the same time it is a relatively rare instance of similar alterations of a short and a long vowel. 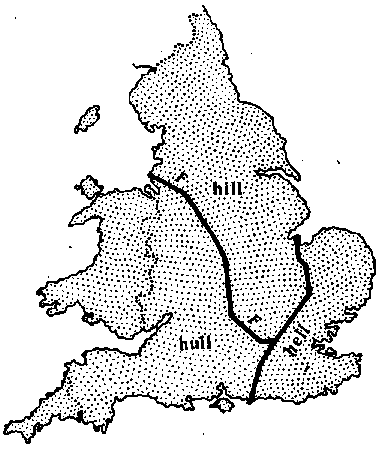 ME pronunciations illustrate the variation stage; the NE words given in the last column show the final stage of the change: selection of one of co-existing variants in Standard English. For the most part NE forms descend from the East Midland dialect, which made the basis of the literary language; this is also true of the word hill shown in the map and of the words fire, king, kiss, kin, little and many others. Some mod­ern words, however, have preserved traces of other dialects: e.g. NE sleeve going back to OE slӯfe entered Standard English from the South-Eastern regions with the sound [e:] (which later regularly changed to [i:], see the Great Vowel Shift § 383 ff). Sometimes we can find traces of several dialects in one word; thus NE busy (OE bysiʒ)comes from an East Midland form with til as far as sounds go, but has re­tained a trace of the West­ern form in the spelling: the letter u points to the Western reflex of [y]; likewise the letter u in NE bury (OE byrian)is a trace of the Western forms, while the sound [e] comes from the South-East (Kent). 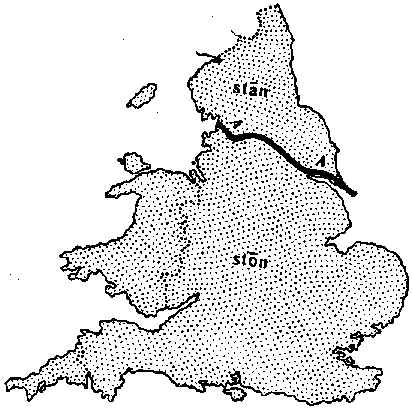 Development of Old English [a:] in Middle Eng­lish dialects

§ 376. In Early ME the long OE [a:] was narrowed to [ɔ:]. This was an early instance of the growing tendency of all long monophthongs to become closer; the tendency was intensified in Late ME when all Jong vowels changed in that direction. [a:] became [ɔ:] in all the dia­lects except the Northern group (see the map above).

The resulting ME [ɔ:]must have been a more open vowel than the long [o:] inherited from OE, e.g. OE fōt, ME foot [fo:t] (NE foot). Judging by their earlier and later history the two phonemes [ɔ:] and [o:] were well distinguished in ME, though no distinction was made in spelling: o, and double o were used for both sounds. (The open [o:] also developed from the short [o] due to lengthening in open syllables, see § 372).[41]

See the map on p. 198 and the examples showing the splitting of [ā] in different dialects:

Most of the modern words going back to the OE prototypes with the vowel [ā] have [a], e.g. NE man, sand, and, which means that they came from any dialect except West Midland; some words, however, especially those ending in [ŋ], should be traced to the West Midlands, e.g. long, song, strong, from, bond (but also sand, rang and band, to be distinguished from bond).