§ 100. The Germanic tribes who settled in Britain in the 5th and 6th c. spoke closely related tribal dialects belonging to the West Ger­manic subgroup. Their common origin and their separation from other related tongues as well as their joint evolution in Britain transformed them eventually into a single tongue, English. Yet, at the early stages of their development in Britain the dialects remained disunited. On the one hand, the OE dialects acquired certain common features which distinguished them from continental Germanic tongues; on the other hand, they displayed growing regional divergence. The feudal system was setting in and the dialects were entering a new phase; tribal dialectal division was superseded by geographical division, in other words, tribal dialects were transformed into local or regional dialects.

The following four principal OE dialects are commonly distinguished: Kentish, a dialect spoken in the area known now as Kent and Surrey and in the Isle of Wight. It had developed from the tongue of the Jufes and Frisians.

West Saxon, the main dialect of the Saxon group, spoken in the rest of England south of the Thames and the Bristol Channel, except Wales and Cornwall, where Celtic tongues were preserved. Other Saxon dialects in England have not survived in written form and are not known to modern scholars.

Mercian, a dialect derived from the speech of southern Angles and spoken chiefly in the kingdom of Mercia, that is, in the central region, from the Thames to the Humber.

Northumbrian, another Anglian dialect, spoken from the Humber north to the river Forth (hence the name — North-Humbrian).

The distinction between Mercian and Northumbrian as local OE dialects testifies to the new foundations of the dialectal division: region­al in place of tribal, since according to the tribal division they represent one dialect, Anglian.

The boundaries between the dialects were uncertain and probably Movable, The dialects passed into one another imperceptibly and dialectal forms were freely borrowed from one dialect into another; however, information is scarce and mainly pertains to the later part of the OE period. Throughout this period the dialects enjoyed relative equality; none of them was the dominant form of speech, each being the main type used over a limited area. 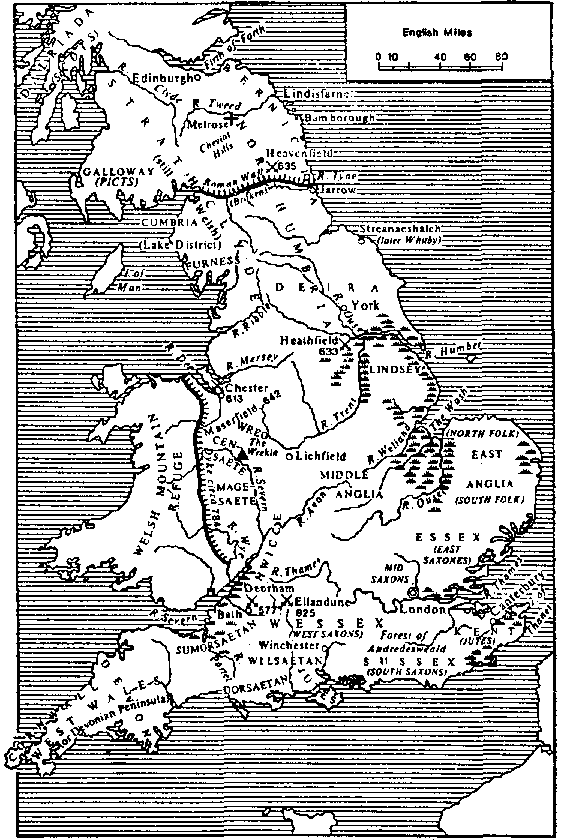 England in the Old English period

As mentioned above, by the 8th c. the centre of English culture had shifted to Northumbria, which must have brought the Northumbrian dialect to the fore; yet, most of the writing at that time was done in Latin or, perhaps, many OE texts have perished. In the 9th c. the polit­ical and cultural centre moved to Wessex. Culture and education made great progress there; it is no wonder that the West Saxon dialect has been preserved in a greater number of texts than all the other OE dia­lects put together. Towards the 11th c. the written form of the West Saxon dialect developed into a bookish type of language, which, prob­ably, served as the language of writing for all English-speaking people.

§ 101. It follows from the above description that the changes in the linguistic situation justify the distinction of two historical periods. In Early OE from the 5th to the 7th c. the would-be English language consisted of a group of spoken tribal dialects having neither a written nor a dominant form. At the time of written OE the dialects had changed from tribal to regional; they possessed both an oral and a writ­ten form and were no longer equal; in the domain of writing the West Saxon dialect prevailed over its neighbours. (Alongside OE dialects a foreign language, Latin, was widely used in writing.)