VACCINES – ANTIBODIES THAT PROTECT US FROM DISEASES

Vaccines are substances that help the body fight off diseases and illnesses. In the past they have helped save millions of lives around the world.

Diseases are often caused by bacteria or viruses that attack the human body. A vaccine is a dead or very weak form of such a virus. When you get a vaccination from your doctor the body it gets used to these weaker viruses and can produce antibodies which stay active for a long time. When the real virus or bacteria attack, the body becomes immune and can defend itself.

People can get their vaccinations in many forms. Very often the vaccine is injected into your body, but vaccines are also taken by mouth or are inhaled.

Although many vaccines protect you throughout your life, some provide immunity for only a certain time. Vaccines against the flumust be administered every year, because the flu virus can change or may appear in a different form.

Most people already have a certain amount of immunity in their bodies. It is passed to them from their mother. However, these antibodies do not protect a baby for a long time, so that many vaccines are given to infants in their first years. 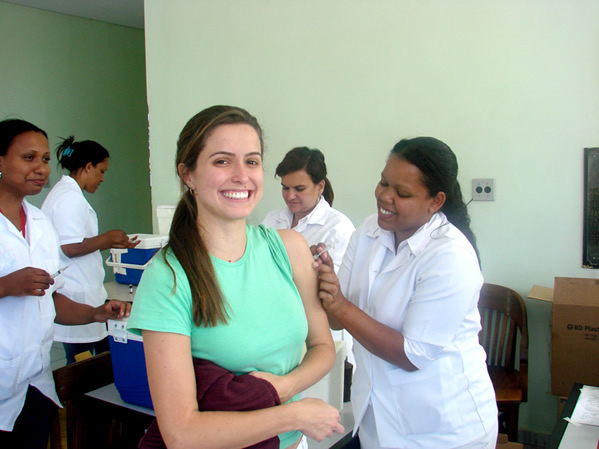 Some illnesses only occur in certain areas. If you travel, for example, to tropical regions, you should get vaccines to protect you fromyellow fever, malaria or hepatitis.

Vaccines have saved the lives of millions of people in the past and virtually eradicated many diseases. Smallpox, for example, was once one of the world’s most serious diseases, which killed millions every year. By the end of the 1970s smallpox had disappearedcompletely because nearly everyone was vaccinated.

The first vaccines were created towards the end of the 18th century. An English scientist, Edward Jenner, carried out experiments with cowpox, a milder form of smallpox. He found out that people who got cowpox rarely got ill from smallpox. In France, Louis Pasteurdeveloped a weak form of rabies to protect people from dog bites. In the 20th century polio has been wiped out completely.

Today there are vaccines for many illnesses. The most common are the flu, cholera, the plague , hepatitis.
Although vaccination is widely available and a part of the regular health program in almost all industrial countries, there are still countries, especially in the Third World where people die of serious diseases. About three million children each year are killed by diseases that could have been prevented. In developing countries almost two thirds of all children are not vaccinated. The World Health Organization is fighting to provide vaccines for these children.

Bacteria are small living things that can be found almost everywhere. They live on the ground, in oceans, in the food that we eat and even in our bodies. They have been on earth long before there were any other organisms .Bacteria are so small you can only see them with the help of a microscope. They have only one cell and very simple structures.

Bacteria have outer cell walls that protect the inside. A cell membrane is inside the cell wall. It prevents harmful substances from getting in and out. Inside the membrane is a soft, jelly-like substance called the cytoplasm. It has chemicals that help build the parts of a cell and break down food. Within it is the nucleoid, which contains the DNA. It controls a cell’s growth and other activities

Bacteria appear in different shapes. Spherical bacteria are round or ball-like. Rod-shaped bacteria live in your intestine and formchains. Spiral-shaped bacteria have a twisted form.

Bacteria absorb nutrients and remove waste through their cell walls. They reproduce by splitting themselves in the middle. The two new cells can then split into four cells and so on. In a short time a single bacteria can reproduce billions of times. 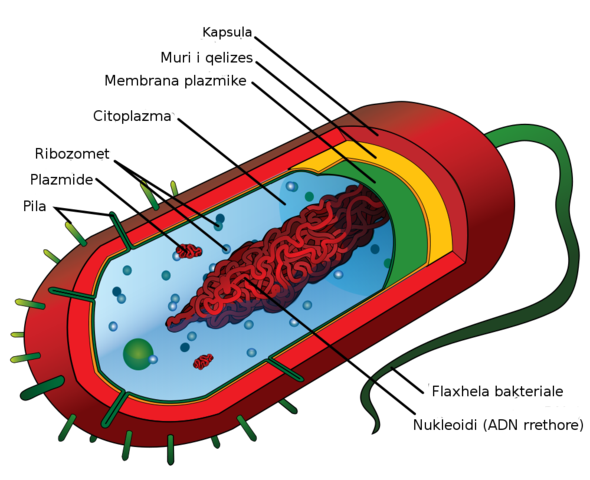 Some bacteria can get inside the human body, reproduce and cause an infection. These harmful bacteria are called pathogens. Ourimmune system is in charge of fighting off these bacteria. However, sometimes we need a vaccine to help fight off these intruders. Vaccines are weak or dead forms of the bacteria itself. Such a substance helps our body fight off bacteria in the future. Some examples of illnesses caused by bacterial infections are tuberculosis or pneumonia.

The best way to protect yourself form bacteria is to keep yourself clean and wash your hands. Because bacteria may be transported by air, we should cover our nose and mouth when we sneeze. Vitamins also help strengthen our immune system and fight off bacteria.

Bacteria can be helpful to the human body as well. They live in our stomach and help us digest food. Other bacteria create cheese and yoghurt. Bacteria are at work in the soil and decompose dead plants and animals.

The word “vitamin” goes back to the Polish scientist Casimir Funk in 1912. He was studying a substance in the layer that covers rice. This substance was believed to cure a disease called beriberi.

Funk believed the substance belonged to a group of chemicals known as amines. He added the Latin word "vita," meaning life. So he called the substance a “vitamine” -- an amine necessary for life.

Scientists have discovered fourteen kinds of vitamins. They are known as vitamins A, the B group, C, D, E and K. Scientists say vitamins help to carry out chemical changes in cells. If we do not get enough of the vitamins we need in our food, we may develop a number of diseases.

This brings us back to Casmir Funk. His studies of rice were part of a long search for foods that could cure disease.

One of the first people involved in that search was James Lind of Scotland. In the 1740s, Lind was a doctor for the British navy. Heinvestigated a problem that had existed in the navy for many years.

The problem was the disease scurvy. So many sailors had scurvy that the navy’s lost some of its strength. The sailors were weak frombleeding inside their bodies. Even the smallest wound would not heal. Doctor Lind thought the sailors were getting sick because they failed to eat some kinds of foods when they were at sea for many months.

Doctor Lind separated twelve sailors who had scurvy into two groups. He gave each group different foods to eat. One group got oranges and lemons. The other did not. The men who ate the fruit began to improve within seven days. The other men got weaker. Doctor Lind was correct. Eating citrus fruits preventsscurvy.

Vitamin A helps prevent skin and other tissues from becoming dry. It is also needed to make a light-sensitivesubstance in the eyes. People who do not get enough vitamin A cannot see well in darkness. Their eys may get dry. This can result in infections and lead to blindness.

Vitamin A is found in fish liver oil. It also is in the yellow part of eggs. Sweet potatoes, carrots and other darkly colored fruits and vegetables contain substances that the body can change into vitamin A.

Vitamin B-one is also called thiamine. Thiamine changes starchy foods into energy. It also helps the heart and nervous system work well. Without it, we would be weak and would not grow. We also might developberiberi. Apart from rice thiamine is found in beans ,peas, nuts, meat and fish.

Another B-vitamin is niacin. It helps cells use food energy. It also prevents pellagra -a disease that causes weakness, reddish skin and stomach problems. Niacin is found in meat, fish and green vegetables.

Vitamin B-12 helps produce red blood cells. It is found naturally in foods such as eggs, meat, fish and milk products. It also helps babies of pregnant mothers before they are born . Vitamin B-12 is found in green leafyvegetables and other foods and citrus fruits. In some countries, it is added to products like bread.

Vitamin C is needed for strong bones and teeth, and for healthy blood. It also helps woundsheal quickly. Because our body storeslittle vitamin C we must get it every day in foods such as citrus fruits, tomatoes and cabbage.

Vitamin D helps make calcium in the blood. Calcium is needed for nerve and muscle cells to work normally. It also is needed to build strong bones. Ultraviolet light from the sun changes a substance in the skin into vitamin D. Fish liver oil also contains vitamin D. In some countries, milk producers add vitamin D to milk so children will get enough.

Vitamin K is needed for healthy blood. It thickens the blood around a cut to stop bleeding. Bacteria in the intestines normally produce vitamin K. It can also be found in pork products, liver and in vegetables like cabbage, and spinach.

Some people fear they do not get enough vitamins from the foods they eat. So they take products with largeamounts of vitamins. They think these products or vitamin supplements will improve their health and protect them from disease.

Experts note that taking too much of some vitamins can be harmful. People should be sure to discuss what vitamins they take with their doctors. This is because some vitamins can cause harmful effects when mixed with medicines.