Chromosomes are threadlike structures found inside the nucleus of a cell. They contain deoxyribonucleic acid (DNA). DNA is a unique molecule because it is able to reproduce itself exactly. This process is called replication(Fig. 2.4). DNA replicates itself so that every new cell receives a complete copy of the genetic code. Thus DNA replicates before mitosis, when new cells are produced for growth and repair. DNA also replicates before the first division of meiosis so that each gamete receives a copy of the genetic material present in the somatic cells of the organism. The chemical bonds connecting the bases break in several places and the molecule separates down the middle. As the molecule splits into separate strands, special enzymes cause the proper nucleotides to pair with complementary nucleotides on each single strand. Other enzymes 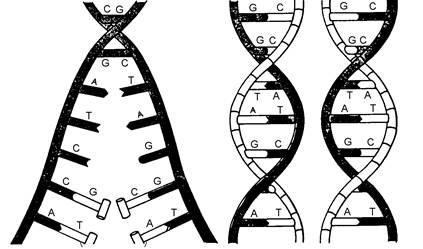 DNA replication results in the formation of two new molecules, each of which receives one strand of the original parent molecule. It is therefore said to be semi-conservative.

DNA replication is the means by which new genetic material is produced in the nucleus of a cell during interphase. The two identical daughter DNA molecules formed from each chromosome coil up and become identical chromatids held together by a centromere. The quantity of genetic material has doubled without changing the cell’s chromosome number. It is at this time, following DNA replication but immediately before nuclear division that the cell’s DNA content is at its maximum.

Most of the kinds of cells in your body are constantly replacing themselves.

After a cell makes exact copies of all of its parts - including its DNA and chromosomes - another process called mitosis begins. During mitosis, material in the cell’s nucleus divides to form two nuclei.

Cell replication is not a single process but a complex of events. It involves the duplication of the chromosomes, growth of the cytoplasm, and the division of the nucleus and cytoplasm. While most cells require 20 hours to go through the entire cycle of replication and growth, the actual distribution of the nuclear duplicates into two daughter cells may occur in less than an hour. The time between the formation of a cell through mitosis is called interphase. During interphase the cell prepares for division by duplicating genetic material, by producing the necessary numbers of organelles, and by assembling the structures needed for mitosis. Interphase itself is not a part of mitosis.

During interphase, chromosomes are not distinguishable under a light microscope. The hereditary material - the nucleic acid DNA and protein - appears as chromatin, dense patches within the nucleus. At the start of mitosis, the chromatin begins coiling up, condensing into short, thick rods that become visible under a microscope. Each chromosome, as it is now called, consists of two joined strands called chromatides. Each chromatide is a duplicate of its partner. The point at which the chromatides are held together is called the centromere.

The process of mitosis is conventionally divided into four phases: prophase, metaphase, anaphase, & telophase; of these, the prophase is the longest. If a mitosis division takes 10 minutes (which is about the minimum time required), during about six of these minutes, the cell will be in prophase.

In early prophase, the chromatin condenses, & the individual chromosomes begin to become visible. You can see that each chromosome consists of two duplicate chromatides pressed closely together longitudinally & connected at the centromeres. Each pair consists of one mature centriole & a smaller daughter centriole.

During prophase, the centriole pairs move apart. Between the centriole as they separate are spindle fibers made up of microtubules & other proteins. Additional fibers, known collectively as the aster, radiate outward from the centrioles. The nucleolus usually disperses, becoming invisible. The nuclear envelope breaks down, marking the end of prophase.

By the end of prophase, the centriole pairs are at opposite ends of the cell, & the members of each pair are of equal size. The spindle is fully formed. It is a three-shaped structure consisting of three groups of protein fibers: astral rays, continuous fibers reaching from pole to pole, and shorter fibers that are attached to the centromeres of the individual chromosomes.

During early metaphase the chromosomes move back and forth within the spindle, apparently maneuvered by the spindle fibers, as if they were being tugged first toward one pole and then the other. Finally, they become arranged precisely at the midplane of the cell. This marks the end of metaphase.

At the beginning of anaphase, each centromere divides, and the chromotids separate. The two duplicate chromosomes pull apart slowly, apparently drawn toward the poles by the spindle fibers. The centromeres move first, while the “arms” of the chromosomes drag behind.

The last stage of mitosis is telophase. After the individual chromosomes have reached the opposite poles of the cell, the spindle fibers dissapear. A nuclear membrane forms around each set of chromosomes as the chromosomes uncoil and once more return to a threadlike mass. The nucleoli also re-form within each newly formed nucleus.