Freud was an Austrian neurologist and the founder of psychoanalysis, who created an entirely new approach to the understanding of the human personality. He is regarded as one of the most influential and controversial minds of the 20th century.

Sigismund (later changed to Sigmund) was born on 6 May 1856 in Freiberg, Moravia (now Pribor in the Czech Republic). His father was a merchant. The family moved to Leipzig and then settled in Vienna, where Freud was educated.

In 1873, Freud began to study medicine at the University of Vienna. After graduating, he worked at the Vienna General Hospital. He treated hysteria by the recall of painful experiences under hypnosis. In 1885, Freud went to Paris as a student of the neurologist Jean Charcot. On his return to Vienna the following year, Freud set up in private practice, specializing in nervous and brain disorders. The same year he married Martha Bernays, with whom he had six children.

Freud developed the theory that humans have an unconscious in which sexual and aggressive impulses are in perpetual conflict. In 1897, he began an intensive analysis of himself. In 1900, his major work ‘The Interpretation of Dreams’ was published in which Freud analyzed dreams in terms of unconscious desires and experiences.

In 1902, Freud was appointed Professor of Neuropathology at the University of Vienna. Although the medical establishment disagreed with many of his theories, a group of pupils and followers began to gather around Freud.

After World War One, Freud spent less time in clinical observation and concentrated on the application of his theories to history, art, literature, and anthropology. In 1923, he published ‘The Ego and the Id’, which suggested a new structural model of the mind.

In 1933, the Nazis publicity burnt a number of Freud’s books. In 1938, shortly after the Nazis annexed Austria, Freud left Vienna for London with his wife and daughter Anna.

Freud had been diagnosed with cancer of the jaw in 1923 and underwent more than 30 operations. He died of cancer on 23 September 1939. 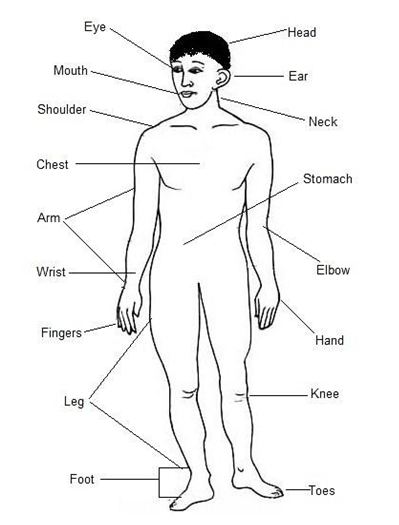 The principal parts of the human body are the head, the trunk, and limbs (extremities).

The head consists of 2 parts: the skull and the face (facial skull). The skull contains the brain and the face includes the forehead, the eyes, the nose, the mouth, the cheeks, the ears and the chin.

The eyes serve as the organ of sight.

The nose is the organ of smell through which we breathe.

The ear is the organ of hearing.

The mouth has two lips: the upper and the lower lip. The tongue is the organ of taste. Adults have 32 teeth.

The head is connected with the trunk by the neck.

The upper part of the trunk is the chest. The principal organs in the chest are the lungs, the heart, and the esophagus.

The lower part of the trunk is called abdomen. It contains the stomach, the liver, the spleen, the pancreas, the intestines, the kidneys, the gallbladder and the bladder.

The waist is the narrow middle part of the body above the hips.

When we speak of the upper extremity we mean the arm. The upper extremity is connected with the chest by the shoulder. It consists of the upper arm, the forearm, the elbow, the wrist and the hand. We have five fingers on each hand. A short finger set apart from the other is called the thumb. The lower extremity called the leg consists of the thigh, the knee, the calf, the ankle and the foot. There are five toes on each foot. The nail is a hard part at the end of a toe and finger.

The framework of bones is called the skeleton. It supports the soft parts and protects the organs from injury. The bones are covered with muscles.

The body is covered with the skin.

The skeletal system includes all the bones and joints in the body. Each bone is made up of many cells, protein fibers, and minerals. 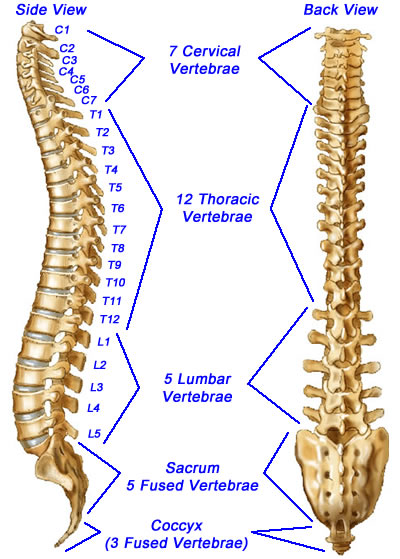 The human vertebral column (spine or backbone) usually consists of 33 vertebrae. They are named by region:

The spine encloses and protects the spinal cord.

Humans have 24 ribs (12 pairs). They are long curved bones surrounding the chest. The first seven pairs of ribs are connected with the sternum (breastbone) by costal cartilages.

The skull is composed of 22 bones that are fused together except for the mandible.

The skeletal system’s primary function is to support and protect the body's organs and attaches the skeletal muscles. The bones of the axial skeleton protect the internal organs—such as the brain and the heart—from damage caused by external forces. The bones of the appendicular skeleton provide support and flexibility at the joints and attach the muscles that move the limbs. Finally, bones act as the body’s warehouse for calcium, iron, and energy in the form of fat.

The heart is a muscular organ about the size of a closed fist that functions as the body’s circulatory pump. The weight of the heart in men averages between 280 and 340 g and in women, between 230 and 280 g.

The heart muscle is called myocardium. Electrical impulses from the myocardium cause the heart to contract.

The septum separates the atria and the ventricles.

The coronary arteries run along the surface of the heart and provide oxygen-rich blood to the heart muscle.

Cardiac cycle is the term used to describe the relaxation and contraction of the heart. The cardiac cycle refers to a complete heartbeat and includes the systole, the diastole, and the intervening pause.

There are 3 major parts of the respiratory system: the airway, the lungs, and the muscles of respiration.

The lungs are the main organs of the respiratory system. There are two lungs in the human body. They are spongy air-filled organs located in the lateral cavities of the chest. The lungs are separated from each other by the mediastinum. The lungs are covered with the pleura. They are conical in shape. Each lung has the base, apex, two borders and three surfaces.

The right lung consisting of three lobes is heavier than the left one because the latter consists only of two lobes. The lower lobe of the left lung is larger than the upper one.

In infants, the lungs are of a pale rose colour, but later they become darker.

Alveoli are the functional units of the lungs that permit gas exchange between the air in the lungs and the blood in the capillaries of the lungs. The lungs have many capillaries with the total surface of about 80 sq.m.