The History of the Telescope

At least two other Dutch spectacle makers made telescopes about the same time, and there were rumours of some such sort of magical device during the 16th century. Nevertheless, a Dutch eyeglass maker, Hans Lippershey, has been given credit for the invention of the telescope in 1608; when he offered it to the government for military use, they required that it be converted to binocular form. Lippershey was the first to describe the telescope in writing.

By 1610, Galileo announced the telescopic observations of the moon and planets, which signaled the end of the Ptolemaic theory of the heliocentric solar system. Galileo’s telescope was a simple refractor, employing two lenses in a tube.In 1609 Galileo learned of the invention of the telescope, a three-power instrument, which he quickly improved to eight, twenty and then thirty power. These were the most powerful instruments of his time and with them he made the discoveries that established Copernican system.

Keppler invented the form of the refracting telescope, which is the basis for modern refractors; it has a convex lens placed in back of the focus. The reflecting telescope invented by Isaac Newton used an on-axis planar mirror to move the focus of the parabolic reflector to a point outside the light collecting cylinder; reflector telescopes avoid the problem of lens chromatic aberration, which affect refractors. Variations of the Newtonian reflector, in which the light was reflected back through a hole in the primary mirror, were invented by James Gregory in 1663 and by Cassegrain in 1672.

One hundred years later, Jesse Ramsden, an English instrument maker who rose from poverty to membership in the Royal Society, discovered that the Cassegrain design may be used to reduce spherical aberration using a paraboloidal reflector and a hyperboloid for the secondary reflector. Microwave reflector antennas often employ the Cassegrain design, with the feed-horn between the primary and secondary reflectors. A lens design, which resolved the problem of chromatic aberration for refractor telescope was discovered in 1733 by Hall but kept secret until it was uncovered and used commercially in 1759 by John Dolland and his son.

A third type of telescope, which uses a spherical mirror and a correcting lens was invented in 1930 by Bernhard Schmidt. It employs a correcting plate at the telescope aperture to compensate for spherical aberration, thus it is a combination reflector-refractor system. The Schmidt telescope serves astronomy as a wide-angle camera. The Schmidt-Cassegrain telescope is the most popular among amateur astronomers because of its compact design and large aperture and because the optics are completely enclosed. 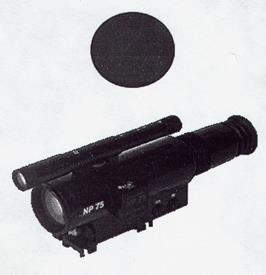 A.The night vision sight NP-75 is designed for aimed hunting gun firing in the twilight and at night. Intensification of luminous flux from the observed scene is taken place by an electrooptical transducer. Luminous laying mark in the field of view of the sight is use for a target aiming. Smooth adjustment of the mark’s brightness allows aiming on targets with different illumination.